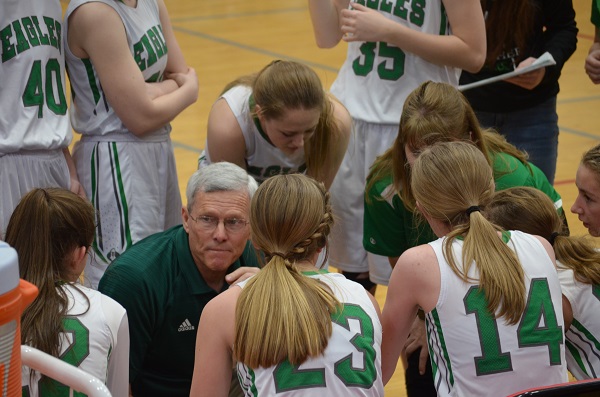 The Gila Valley basketball teams were able to flex their basketball muscles today in Prescott as the Graham and Greenlee county teams went 6-1.

The Pima boys team started off the day with a 9am tipoff with 21-3 St. Augustine from Tucson. The 11th seeded Rougriders started quick with the inside play of Dawson Pruszynksi and Jake Whitaker and led 15-5 after the first quarter. The Wolves answered back with a 1-3-1 half court trapping zone defense in the 2nd quarter that stymied the Riders and held them to just 6 points, but Pima held that lead at halftime 21-15.

The 3rd quarter belonged to Pruszynksi as he punished the Wolves inside for 13 of his game high 22 points. St. Augustine scored just 12 points in the quarter and trailed 42-27. The 4th quarter didn’t see much change as Pima was able to get their bench player some valuable minutes and picked up the win 61-40. The Riders had the rebounding edge 44-11. Pima’s coach Cliff Thompson told me on the radio after the game that there would be a big problem if they didn’t win with a rebounding advantage like that.

In the 1:30pm game the #7 Thatcher Lady Eagles picked up the win over #1o Phoenix Christian. Thatcher was led by Brooklyn Angle’s 19 points. Sophomore Karlee Lords chipped in 15 off the bench. The Eagles used their full court defense and height advantage to put this game away in the 3rd quarter. The Cougars lone senior, Mawe Rivero, had 20 points in her final game.

At 3pm the #4 ranked Thatcher Eagles took little time putting away #13 Chandler Prep. Thatcher led 17-4 after the first quarter and stretched that to a 36-6 lead at the break. Matt Palmer scored all 16 of his points in the first half to lead the Eagles. Rulon White added 11 off the bench as well. That Eagles suffocated the Titans guards with sticky defense and forced numerous turnovers that led to easy fast break points. Marcus Ruiz Jr. led CPA with 18 points in his final game.

Morenci knocked of Phoenix Country Day 69-38 to set up a big matchup with Thatcher Saturday at 4:30pm.

Other local scores from Day 1: