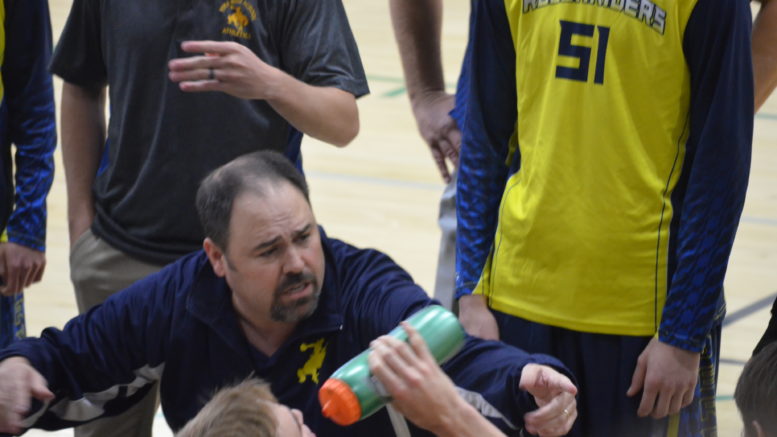 Fort Thomas used an inside out game to put away Mohave Accelerated 60-41 in the Toyota Center. They will play at 9am on February 22nd against The Gregory School in the 1A semi-final. The Hawks beat the Apaches 80-76 on February 5th in Tucson in their only meeting of the year.

For the 2nd day in a row the Pima Roughriders upset a higher seed in the tournament. A day after downing #6 St. Augustine, the ‘Riders took out #3 Globe, handing them just their third loss of the season. Dawson Pruszynksi led Pima in the 1st half with 13 points and 7 rebounds and the Riders led 40-36. Globe guard BJ Burries, the all time leading scorer in Arizona, had 18 of the team’s points at the half.

Pima changed their defense to start the 3rd quarter and sent two defenders at Burries every time he touched the ball. It turned out to be very effective for the Riders and Burries was held to just 2 points in the 3rd quarter. Alec Judd scored 8 of his 18 points in the quarter and Pima’s lead ballooned to 65-48. Globe would get the deficit down to 11 midway through the 4th when Burries fouled out. The Tigers would never threaten again and Pima cruised to an 83-62 win.

Pima will play Alchesay Friday, February 22nd at noon in the 2A semi-final.

Thatcher vs. Morenci part 4 didn’t disappoint the capacity crowd at Yavapai College. If you saw the regular season finale, you’ll recognize this story. Thatcher jumped out to an 18-10 lead after 1 quarter. Cole Motes led the Eagles with 9 points in the quarter. Matt Palmer, Michael Greer and Rulon White got hot in the 2nd quarter and pushed Thatcher’s lead to 14 at halftime.

The break was perfect timing for the Wildcats as they came out torching the nets in the 3rd quarter. Shawn Michael Chavez hit three 3’s and Ryan Hayes chipped in 7 as Morenci exploded for 30 points in the quarter and only trailed by 4.

The 4th quarter ended up being a free throw contest as both teams were in the bonus. The teams combined for 22 shots from the charity stripe. Morenci took their first lead of the game at the 7 minute mark of the 4th quarter with a John Olmsted layup, the two teams would exchange the lead several times down the stretch. With 4 seconds remaining, Thatcher’s Kason Crosby hit two free throws late to give Thatcher a 72-69 lead. Morenci’s Jordan Leonard’s last second three point attempt fell short and the Eagles survived by the exact same score from the regular season finale.

Thatcher was lead in scoring by Cole Motes with 17, White 13, Crosby and Palmer both with 12. Olmsted led Morenci with 16. Jordan Leonard had 18. Ryan Hayes added 14 and Chavez 11.

Thatcher will by Friday, February 22nd at 6pm against the winner of Scottsdale Christian and Rancho Solano Prep.