SAFFORD – After a little more than a month of daily practice, the Gila Valley’s swim team season ended with a splash Saturday as Safford hosted the summer league finals.

Swimmers from Morenci, Thatcher, Pima and Safford converged at Firth Park to pit the best of the best against each other. While everyone on a team swims in a regular swim meet, only the top eight in each category swims in finals, with the top three finishers in each event receiving a medal.

“The season was awesome,” Pima head coach Natalie Schlittenhardt said. “We had about 85 swimmers to start and we had about 50 qualify (for finals), so we had a great percentage; a great year, and we’re ready to start again next year . . . Pima swim team is awesome.” 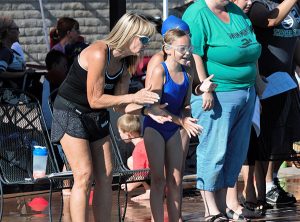 The swim of the night was put on between Morenci’s Marlo Day and Thatcher’s Avery Johnson, who battled throughout the meet for supremacy of the 11-12 girls bracket, including a thrilling and captivating performance in the 100 Individual Medley.

Johnson started out of the gate strong and managed to build a body-length lead by the end of the backstroke leg. Day, who earlier cruised to a gold in the breaststroke, chiseled away at Johnson’s lead, however, and it was all even going into the last freestyle leg. As both girls pushed themselves to their limits, Johnson edged out Day and finished victorious by touching the wall in first place by mere hundredths of a second.

“I didn’t really expect it,” Johnson said. “Usually she beats me . . . It was surprising. I just worked hard for it.” 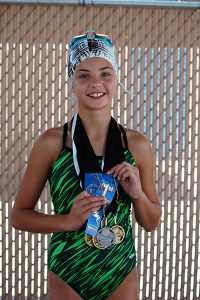 All of the coaches said their favorite part of swim team was watching how much the swimmers improve over the summer.

“I love the kids,” Safford head coach Vanessa McMillan said. “It’s all about the kids. It’s getting them in; seeing them improve, seeing their excitement as they get the races and they improve and place higher than before. It’s just a great job.”

Thatcher head coach Lori Christensen also had nothing but praise for her swimmers.

“The season has gone well,” she said. “We’ve practiced and worked hard and the kids have enjoyed themselves. I enjoy seeing improvement in the swimmers.”

Jon Johnson Photo/Gila Valley Central: Pima’s Josie Peterson, left, and Avalon Johnson leap at the start of the six and under breaststroke.

Jon Johnson Photo/Gila Valley Central: Swimmers dive into the water at the start of the 13-14 girls freestyle.