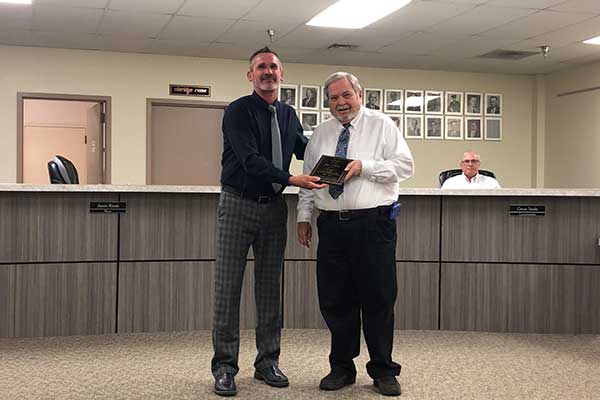 Gene Fowler recently stepped down from his position on the City of Safford Planning & Zoning Commission after 18 years of service. Fowler’s service on the commission was recognized by Safford mayor, Jason Kouts and the Safford City Council at their council meeting Monday night.

Fowler was appointed to the commission in February of 2001. He served as chairman of the commission from January 2013 until he stepped down from his position last month.

Fowler worked in banking prior to moving to Safford in 1976. He began working at First National Bank of Arizona in Phoenix in 1962. In 1970, he accepted the position of Assistant Branch Manager for First National Bank in Benson. In 1973, he accepted the position of Administrator Coordinator for Arizona Electric Power in Benson. Fowler moved to Safford in 1976 and started Eastern Arizona Exterminating. Drawing on his computer expertise, he opened Eastern Arizona Computers in 1983, which he continues to operate today.

“You have a really good planning and zoning commission here in Safford that really has the community in mind,” Fowler said in accepting the recognition. “I’ve been privileged to work with several directors. Each one has contributed some real good expertise that has brought up our planning and zoning to what it is today.”

Fowler said that the commissioners do their homework. “Whenever we have a meeting,” he said, “Everybody comes having done their homework, and knowing what needs to be done.”

Fowler said that when he was appointed to the commission he was concerned about how badly he would be hated and have his windows broken because of the decisions that the commission made. “I’m very happy to say,” he said, “that there were a number of times that friends of mine would come before the commission with requests that we were unable to agree with. Out of all those times, there was only one man that didn’t speak to me for a couple of years, but he got over it and we became friends again.

“When you’re serving others,” he continued, “you receive great benefits back.”

At the end of Fowler’s comments, Mayor Jason Kouts presented him with a plaque, recognizing his service on the commission.