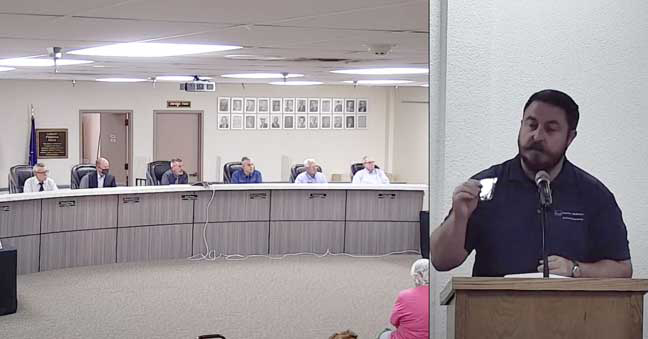 Freeport-McMoRan's Sean Wenham, far right, displays the copper coin being presented to the Safford City Council to commemorate the opening of the Lone Star open-pit copper mine in Safford to full uperations. - Contributed Photo

“Thank you for the ongoing partnership, for the wonderful rapport and working relationship that we enjoy with you,” said Sean Wenham, regional manager of community development for Freeport, during his presentation to the council.

“I think both the direct and indirect projects that we’ve been able to help get done in Safford — indirectly, something like the skate park, and then more directly sponsorships of Merry Main Street and projects through the (Safford) Downtown Association, Glenn Meadows Park, La Tierra Park. There’s been some great advancements and developments made. And we look forward to a fruitful working relationship in the future and, hopefully, more great projects and great things to come, especially once we get on the other side of the pandemic.”

The Safford operation currently consists of two open-pit mines, capable of producing up to 103,000 metric tons of copper cathode per day.

“Both opening up that ore body on the other side of the mountain that represents such a key part to our future in the next couple decades of operations at Safford, as well as the leach pad and some of the other smaller projects. We’re kind of putting some punctuation to it, like I said, celebrating it,” Wenham said.

The Safford and Morenci mines produce a combined $354.7 million in direct economic impact to Graham and Greenlee counties, as well as $611.5 million annually to the state of Arizona.