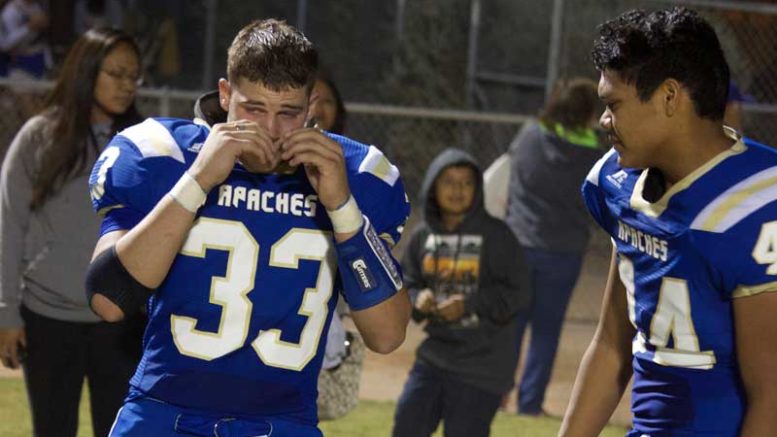 Seven turnovers too much for the Apaches to overcome

Fort Thomas – When a team loses the turnover battle by five, it’s usually not going to end well.

The Apaches had just beaten the Lobos on the same field two weeks prior to the playoff game, 56-42, but their inability to stop Hayden’s potent rushing attack and the loss of seven turnovers on the night doomed the outcome for Fort Thomas.

“We were well prepared,” Hayden head coach John Estrada said. “They beat us a couple weeks ago and we made some adjustments from (the) last game.

Jon Johnson Photo/Gila Valley Central: Hayden running back Frankie Valencia balances the football on his helmet before hauling in the catch for the first down. Valencia had four touchdowns on the night.

Hayden came out playing smash-mouth football and rode its big fullback Joel Rodriguez all night long. After a 28-yard scamper down the right sideline put the Lobos into Apache territory, Rodriguez capped off the Lobos’ first possession by diving into the end zone from half a yard out for his first of four TD’s on the night and Hayden was up early, 8-0.

The Apaches struck right back with their mighty air attack as Tagipo Fiame activated his cloaking device and ran uncovered down the left sideline. QB Evan Stringfellow spied him and tossed one right into his breadbasket, which Fiame then took 41 yards for the score and the game was tied, 8-8. 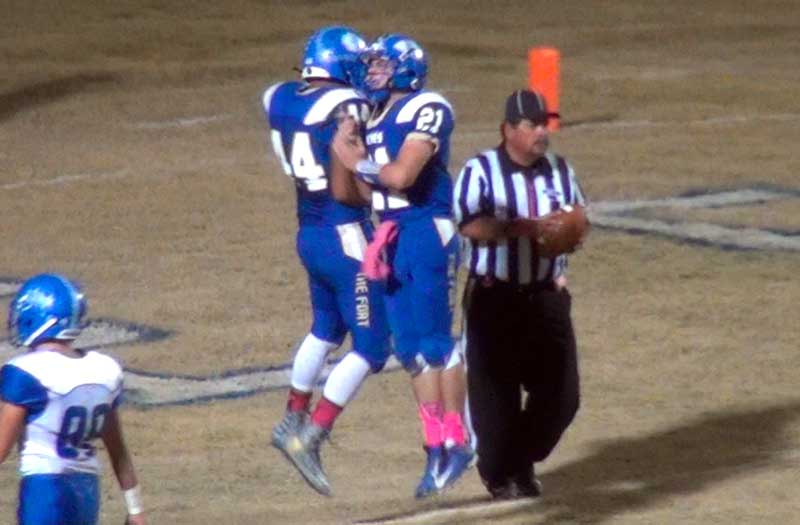 Jon Johnson Photo/Gila Valley Central: Tagipo Fiame, left, celebrates with Evan Stringfellow after the pair hooked up on a 41-yard toss-and-catch for a touchdown.

After the offenses spread their wings, it was time for the defenses to shine as both teams turned the ball over on downs at the 5-yard line while threatening to score on each of their next possessions.

Turnovers were truly the downfall for the Apaches with each of their five possessions in the second quarter being lost by a turnover. On the night, Fort Thomas had three interceptions, two fumbles and turned the ball over twice on downs. Fort Thomas head coach Bracken Walker said the situation wasn’t familiar with them as they had only seven traditional turnovers during the entire regular season.

“We had seven total turnovers coming into the game,” Fort Thomas head coach Bracken Walker said. “It’s just one of those nights where the ball didn’t bounce our way. We hadn’t turned it over all year, but credit to Hayden, they made plays. They made the turnovers; the ball bounced their way and they had a good win.”

Despite the turnovers, the Apaches were only down 8 at the half, 16-8, after the Lobos capitalized on good field position from an interception by Robert Borhn and Rodriguez took it in from 2-yards out.

The Apaches failed to convert on fourth down on their first possession of the third quarter, however, and Hayden marched down the field, with its possession ending on a 5-yard TD sweep by Valencia to go up 24-8.

After the Apaches’ only punt of the night, the Lobos’ Omar Lopez appeared to have made a great 20-yard TD run, but the play was called back for holding. The Lobos got the penalty yards back on the next play, however, after the Apaches’ Austin Metcalf burst through the line for a big tackle for loss but couldn’t let up as the whistle blew and continued to drive Jorge Rodriguez into the turf.

The penalty helped set up Joel Rodriguez for his fourth score as he went in from two yards out to put the Lobos up 30-8 early in the fourth quarter. 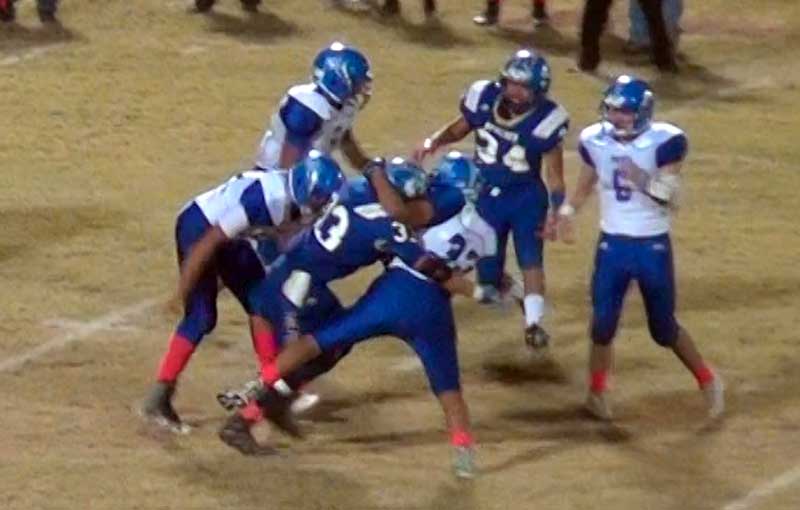 Jon Johnson Photo/Gila Valley Central: Austin Metcalf sticks Jorge Rodriguez for a loss. Metcalf was flagged on the play, however, for driving Rodriguez into the turf after the whistle had blown.

The Apaches have moxie, however, and they never gave up and actually had a chance to come back late in the game.

After a big Stringfellow run, Metcalf went around the right side and scored to cut the lead to 30-14. Then the Apaches’ defense forced the Lobos to punt and Fort Thomas was soon back in the red zone, threatening to score.

“I knew they were going to bring it,” Estrada said. “They’re a tough team. I take my hat off to them.

Stringfellow couldn’t handle an errant snap, however, and the Lobos jumped on the ball for the Apaches’ seventh turnover with just 3:18 left in the game. They did a heck of a job.”

Still, the Apaches wouldn’t admit defeat and forced another punt. This time, Kendall Stanley took the punt back 35 yards down to the Lobos’ 20-yard line and the Apaches were back in business. 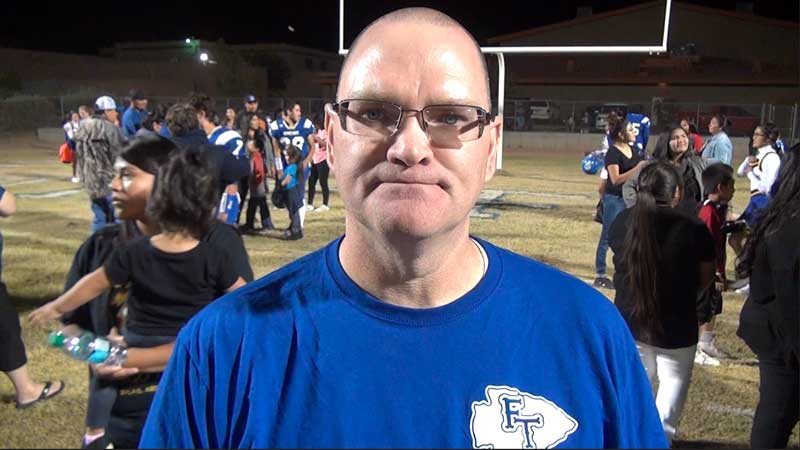 With just 1:04 left in the game, Fiame dragged Lobos into the end zone and scored from the 2-yard line. The 2-point conversion failed, however, as well did the onside kick, and the Lobos move on to face No. 1-seed Mogollon (7-0 conference, 7-0 overall) with the 30-20 win.

Despite the early departure from the playoffs, the season was a success for Fort Thomas, which turned around its previous year’s record of 2-6 to 6-2 coming into the playoffs.

“They just kept fighting and actually gave us a shot at the end – got back into it,” Walker said. “I’m real proud of that for them.

Senior quarterback Evan Stringfellow praised his teammates and predicted next year’s team will even aspire to greater accomplishments.

“I’m just proud of them all,” Stringfellow said. “We got down but we never gave up the whole game. I couldn’t be prouder of the team . . . Next year, they’re going to come back and do a lot better. (I) just love the game.”

Thatcher (6-1 conference, 8-1 overall) bounced back from its loss to Round Valley (6-0 conference, 9-0 overall) by pummeling San Carlos (2-7 conference, 2-7 overall) 67-8. And while it’s hard to believe, it wasn’t even that close. Thatcher will finish up its regular season at Miami (3-6 conference, 3-7 overall) on Friday and then wait to see where it will be placed in the playoffs.

Pima (5-4 conference, 5-4 overall) got trampled by the Round Valley Elks, 55-8. Pima will finish its regular season with the battle of the counties at Morenci (6-3 conference, 6-3 overall), which is coming off a blowout win over Miami, 45-0.