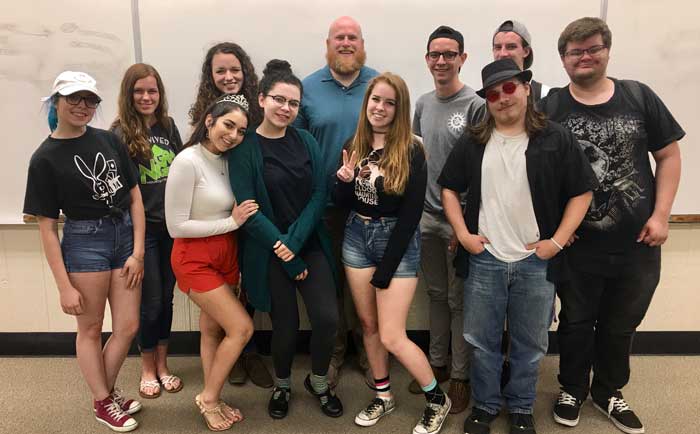 Photo By Steven Higginbotham: Playwright David Spence poses with a group of students in the EAC Repertory Acting Company after working with them on scripts they are preparing for an upcoming performance.

THATCHER — Eastern Arizona College’s faculty and students in Division of Fine Arts are in the midst of rehearsals for a performance project based on George Gershwin’s classic, Rhapsody in Blue, and his Three Preludes. This orchestral dance theatre piece features an original script by guest playwright, David Spence, and will receive its world premiere on EAC’s campus in November.

Spence visited EAC last week to see the student performers in action, meet with members of the design team, and offer playwriting workshops for EAC’s Department of Theatre Arts.

Spence is a playwright and screenwriter based in Denver, Colo. He attended graduate school at Florida State University in the Master of Fine Arts Program in writing for the stage and screen, and his previous works for the stage and screen include Recreational Living and Roswell FM. He has taught classes in screenwriting and story structure at New Mexico State University and currently works as a freelance writer for various performance projects.

“I am thrilled to continue my love of education and theatre in this wonderful collaboration with Eastern Arizona College,” Spence said. “This is such a unique project, and it has been exciting to see how all of the different disciplines in the college – music, dance, and theatre – have come together to work on it.  I have been amazed by the progress achieved in only a few weeks of rehearsal, and it is apparent that the faculty, staff, and students are working hard to make this project a success. I can’t wait to see the potential which ultimately will be realized by these artists working so diligently together.”

In addition to attending rehearsals for the show, Spence spent time with students in EAC’s Repertory Acting Company.  He offered a playwriting workshop and helped students to develop scripts for an upcoming performance.

“He’s so funny, and he is an amazing storyteller – I can see how that also makes him a great playwright,” said Alyssa Ruiz, a sophomore at EAC majoring in Theatre Arts. “He made me think of things I would not have considered otherwise when working on my script. He makes sure every part of the story you are telling in a play is valid and essential in relaying the main point to the audience.”

“During my visit to the campus, I’ve found that all of the students at EAC have a great sense of positivity and a willingness to participate,” Spence said. “In the playwriting workshops, they were so eager to do the work of theatre and were so nice and helpful to one another as they were participating in the class. Everyone just cares so much about learning and creating, and they have made such a wonderful environment for doing so.”

Spence’s script for Rhapsody will tell the story of a young couple charged with the task of going through their grandparents’ boxes of old belongings and memorabilia and will follow them through song and dance as they learn the lessons of life and love. George Gershwin’s composition, Rhapsody in Blue, will be the centerpiece of this production, featuring a solo piano performance by Chase Moore, and an outstanding 50-piece orchestra to be conducted by Franklin Alvarez, EAC’s orchestra director.

Rhapsody will be performed in the Fine Arts Auditorium on Nov. 9 – 11, at 7:30 p.m. General admission is $5, and full-time students with EAC identification will be admitted free of charge. Tickets can be purchased at the door before each performance or by calling Eastern Arizona College’s Ticket Office at (928) 428-8228.