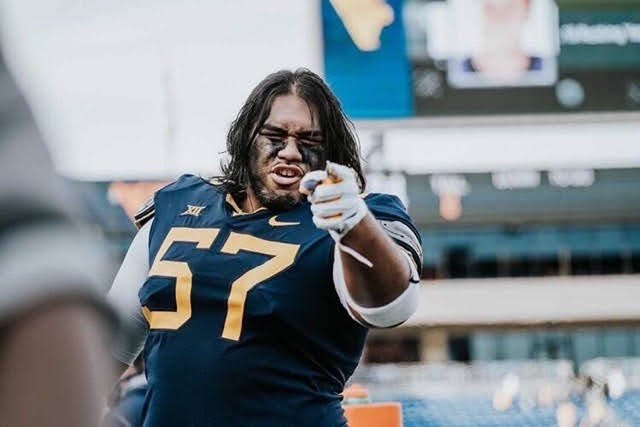 Michael Brown didn’t play high school football. The Compton, California native didn’t start playing until then EAC Head Coach John O’Mera took a chance on him and his brother in 2016.

O’Mera was recruiting Michael’s brother, Joe, when he learned about Michael. “After talking to him on the phone I knew he was a guy I wanted to give a shot at. When he got to campus he did everything we asked him as he learned the game,” he said.

During his two seasons at EAC, the Monsters led the nation in rushing yards and won 17 games, including two Salt City Bowl games.

After graduating, he was recruited to play for the West Virginia Mountaineers. His skills improved and he earned a starting position on the offensive line, mainly playing right guard. The Mountaineers had three consecutive winning seasons while Brown was on the OL, including winning this year’s Liberty Bowl.

Brown has been awarded many football honors in his football career including; Second Team All-Big 12 Conference Offensive Lineman, All American Mentioned Big 12 OL, Academic All-Big 12, and Most Improved Offensive Player for WVU Football.

He is now training for the Grid Iron Bowl in Dallas, TX (Jan. 19-21) and also the Hula Bowl in Hawaii (Jan. 31). Many NFL scouts will be in attendance and Brown will be sure to impress them with his skills.

Since playing for EAC, Brown has been goal driven and motivated to play for the NFL. And to think it all started here at Eastern Arizona College.

O’Mera predicts that Brown will be drafted as high as the 4th round in this year’s NFL Draft.