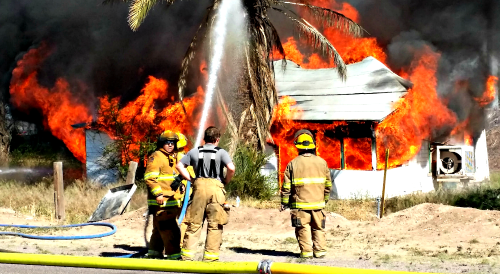 On March twenty-fifth, a Church Street house in Thatcher was ablaze. Black smoke arose into the air as the neighbors watched the Thatcher Fire Department put out the flames engulfing the small old house.  For years the quaint little house had stood empty and lonely on a large plot of pecan trees. Dating at least back to the fifties, the small house radiated the feel of a simpler time, and now it is nothing but ash.

According to the Thatcher Fire Chief Mike Payne, the house fire was a training exercise. “It was a training exercise for students working on their Arizona State Firefighter I &II certifications,” he stated, “there are 10 students in the class from Safford, Thatcher and Duncan fire departments.  One of the requirements is that they participate in a live fire exercise.” He later went on to explain why the owners of the house let it be set aflame. “The house was in very poor condition and had been purchased by an individual who wanted it removed.  He offered it to the fire departments for training.”

Today’s homes burn faster than they did thirty years ago for a number of reasons. The first reason is that the rooms are full of belongings. Each year, more than 2,500 people die and 12,600 are hurt in house fires in the United States.  It takes less than thirty seconds to turn a small flame into a completely out of control major fire. What many people don’t know is that the heat is more threatening than the flames. A fire’s heat alone can kill someone. This heat can be up to six hundred degrees, melting your clothing to your skin and making the entire room ignite at once. This event is called a flashover.

Every time a house burns down, the neighborhood watches in an odd type of awe. Thankfully, this was a planned fire for educational purposes. However, although this was a planned fire, any fire is dangerous. We are all grateful for our firefighters who work so hard and train so hard to be ready if we ever call out for their help.

Statistics for this article was found at www.ready.gov