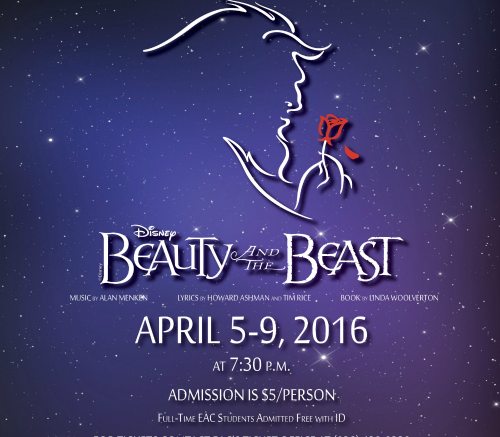 THATCHER, AZ—Eastern Arizona College’s Theatre Arts Department is pleased to present the Disney musical Beauty and the Beast on April 5, 6, 7, 8, and 9, at 7:30 p.m. in the College’s Fine Arts Auditorium. Admission is $5 per person. Full-time EAC students will be admitted free with a current EAC ID.

Based on the smash-hit Disney feature film and dating back to a late 18th-century classic French fairy tale, Beauty and the Beast tells the story of Belle, a beautiful and intelligent young woman who feels out of place in her provincial French village. When her father is imprisoned in a mysterious castle, Belle’s attempt to rescue him leads to her own capture by the Beast, a fearsome monster under the spell of a powerful enchantress. The only way for the Beast to become human again is to learn a valuable lesson: to love and to be loved in return. Can Belle teach him how to do so? Come and find out!

With stage direction and choreography by Steven James Higginbotham, vocal direction by Patricia Jordahl, Orchestral direction by Dr. Tom Sullivan, set designs by William H. Nidiffer, costume designs by Timilee McNair, lighting and sound designs by Don Eller, and stage management by Liesel Holland, this production is sure to enchant audiences with a magical and talented cast of students and community members.

EAC’s Theatre Arts Department is honored to have Patricia Jordahl in the cast of Beauty and the Beast as the lovable Mrs. Potts. In her over 20 years with Eastern Arizona College, Jordahl has served as the Chair of the Division of Fine Arts, director of EAC’s Women’s Chorale, director and musical director of countless musical productions, and instructor of music and musical theatre. When asked how she feels about this show, she replied, “Disney’s Beauty and the Beast has long been a favorite of young and old alike, and I have always thought it would be a fun show to share with our great Gila Valley audiences. As I finish my career at EAC, it is an honor to collaborate on this show and to be a part of our great cast as well!”

Jordahl will retire in May after a celebrated career at Eastern Arizona College and the entire community is invited to attend a special reception in her honor scheduled for Saturday, April 23, 2016. For more information about the reception, contact the EAC Alumni Association at (928) 428-8295.

Tickets for Beauty and the Beast can be purchased at the box office before each performance or by calling Eastern Arizona College’s Ticket Office at (928) 428-8228. Advanced reservations are recommended. General admission is $5 per person, and full-time EAC students will be admitted for free with a valid student ID. Come, support the performing arts in your community, and feel the magic with Eastern Arizona College’s production of Beauty and the Beast!