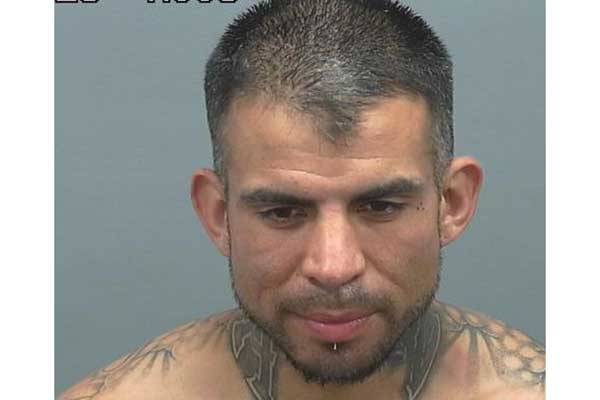 As the first officer arrived on the scene, he observed multiple vehicles parked along the shoulder, and a group of people waving towards him. One man was lying on the ground and others fled the scene as the officer arrived. As the officer got out of his patrol car, a woman ran toward him yelling, “he’s got a gun,” pointing toward 16th Street.

According to the police report, the officer saw a man pointing a gun at another man. With his service weapon drawn the officer ordered the man to put the gun down. As the man replied to the order, the other man, identified as Robert Hernandez, began walking toward the other man with his fists clenched, yelling obscenities at him. Hernandez kicked the gun just as the officer made contact with him, handcuffed him and took possession of the firearm.

Hernandez told police that he had stopped by a friend’s house to say ‘Happy Easter.’ Hernandez said that another man at the house accused Hernandez of trying to get together with his girlfriend. Hernandez stated that the man, along with two other men, wanted to fight so the three men went outside. Hernandez said one of the men threw a punch and the two of them started fighting.

Witnesses reported that the man lying on the ground when authorities arrived was a good Samaritan who had stopped to try and break up the fight. The man’s girlfriend told police that her boyfriend saw that one man was being hit by three others and stopped to try to break it up. He reportedly pulled Hernandez off of one of the other men, but Hernandez turned and started punching him.

A neighbor who witnessed the fight got involved to try to help the good Samaritan who had apparently been beaten down to the ground by the other men. The neighbor told police he had been watering his lawn and heard a commotion. When he saw the fight in progress he went to try and beak it up. The witness said that when the men turned on the good Samaritan, others joined in the fight. At that point he drew his weapon because the people engaged in the fight started coming after him.

Hernandez continued to pursue the man as he backed away, trying to keep distance between them. As the man backed himself onto his own property, Hernandez reportedly jumped over a short chain link fence and walked through the yard toward him. When Hernandez was only about 2 feet away, he apparently took a swing at the man, prompting the man to step back and point his gun at Hernandez, who was apparently taunting the man, shouting, “If you’re going to pull a gun, use it.” At this point the officer arrived, took Hernandez into custody and secured the Firearm. The gun was returned to its owner after being checked for wants.

The good Samaritan was transported to Mount Graham Regional Medical Center where he was treated for his injuries.

Hernandez was transported to the Graham County Jail and booked on charges of assault and disorderly conduct. Hernandez reportedly told police that he did not want them to find the other men involved in the fight and that he would not make any further statements. According to the police report, officers have not yet located the other people involved in the fight.