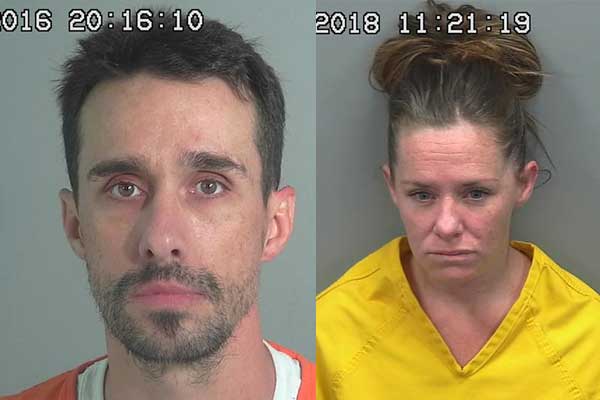 SAFFORD – Officers responded Friday morning to a motor vehicle accident around 12th Avenue and Chaparral Drive. It was reported that a man and woman were yelling in the street, that the man was driving an ATV and rolled it, ejecting him 10-15 feet. The man reported to officers that he laid the ATV on its side and it fell over.

The man identified as Tyler Goucher seemed visibly agitated to officers, while raising his voice and throwing his hands up as he explained what happened. Goucher said he was trying to catch up to his girlfriend in her car, she wouldn’t stop, and he tipped his 4 wheeler over trying to get her to stop so he could talk with her. Goucher was seen limping, but said he wasn’t hurt and refused medical attention. The officer noticed his speech was slurred and he had watery, bloodshot eyes.

The investigator spoke with the female, known to them as Tracy Lackner, driving the vehicle who explained that Goucher asked her to meet him at a residence and when they arrived, he pulled up next to her and started arguing with her. She then drove away and Goucher followed her. When she turned from 12th Avenue to Chaparral Drive, Goucher attemped to cut her off and rolled his 4 wheeler.

The officer was advised through an anonymous reporting party that Goucher and Lackner were heard fighting and talking about heroin being in the car and saw Goucher getting into the seat portion of his ATV and Lackner going to the passenger side of her car shortly afterward.

A records check of Goucher revealed his driver’s license had been suspended, and court action was required. The officer had Goucher perform some DUI tests and Goucher admitted to smoking marijuana earlier in the morning. Goucher showed signs of methamphetamine use but denied ever doing any other drug.

Goucher was placed under arrest for driving while under the influence, impaired to the slightest degree and for driving with a suspended driver’s license.

An officer spoke with Lackner in reference to her drug use. She said she has a prescription for pain medication and that she uses heroin when she runs out of the medication. When asked, Lackner agreed to allow officers to search her vehicle. A small pen tube was found with heroin residue in the passenger side door panel of the vehicle. Lackner was placed under arrest for possession of drug paraphernalia. Investigators continued the search through Lackner’s purse where they found a small metal smoking pipe with marijuana residue that Lackner claimed, belonged to Goucher. Several other items in the purse contained white residue consistent with marijuana use. Lackner was transported to the Graham County Jail