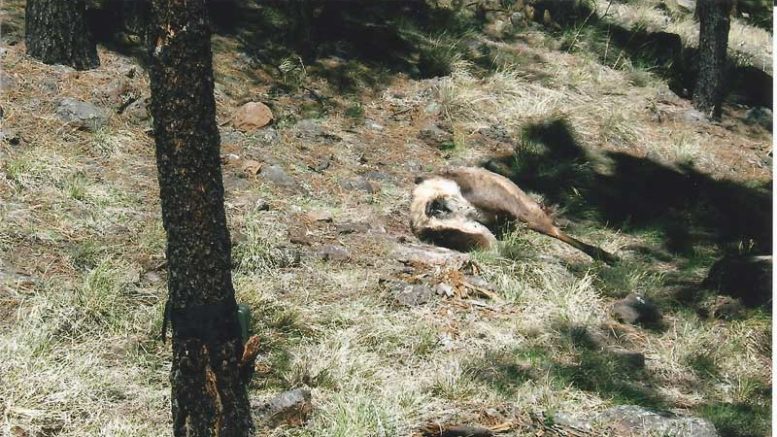 Photo By Dexter K. Oliver: A road-killed cow elk is put out for Mexican gray wolves to eat. Notice the trail camera attached to far side of the tree in the bottom left.

I received the Mexican wolf update, as I do monthly, for August 2017. As is often the case, there were disturbing items recorded therein. This is ill-foreboding for the U.S. Fish and Wildlife Service (FWS) which recently offered its draft Mexican Wolf Recovery Plan calling for a large population expansion.

Out of 22 current Mexican wolf packs in Arizona and New Mexico, nine were the beneficiaries of a “diversionary food cache” intended to keep wolves from killing cattle or to help increase “survival of genetically valuable pups”. This open-air zoo behavior by the Interagency Field Team (IFT) has been going on since individual wolves were first released in 1998. No matter how careful IFT biologists or their constantly changing team of volunteers might be, this still results in re-introduced wolves associating humans with food, a self-defeating exercise.

It also means that humans will continue to be directly involved with trying to train or prop up wolf packs from now until eternity (apparently the date wolf project leader Sherry Barrett and her minions are assuming it will take for the animals to be self-sufficient and removed from the Endangered Species list). Because the new recovery plan is demanding so many more Mexican wolves in the United States more tax dollars will be necessary to pay for personnel providing these free meals. And the same problems will escalate.

Five domestic calves were killed by Mexican wolves in August 2017 and some hikers had an unwanted close encounter with some of the collared wolves. Apparently, the people bumped into two adult wolves with pups at a rendezvous site (maybe where the IFT had placed food for them?) and even a pistol shot into the ground didn’t scare the wolves away. Luckily, the adult wolves merely escorted the people out of the area, a response that has been noted before. The calves, of course, weren’t that fortunate.

According to the Mexican wolf update provided by the FWS, there was a minimum of 113 individuals counted at the end of 2016. Mexico, where 90 percent of Mexican wolf habitat and historic populations occurred, has possibly a quarter of that number on the ground, nobody knows for sure. Maybe it’s time to see if our neighbor to the south is willing and able to shoulder its proper share of this burden. We should quit augmenting the numbers in the USA, quit feeding and trying to “train” wolves already here, and wait to see if Mexico can reach its 90 percent goal. If they can’t or won’t, we should disband the IFT and let the biologists who haven’t already retired off this faulty experiment get back to their offices from wherever they came. Having to provide food to 41 percent of the “wild” wolves currently in Arizona and New Mexico, after two decades of reintroduction follies, is ludicrous.

Dexter K. Oliver is a freelance writer and wildlife consultant who has worked for government and non-government organizations in the United States, Mexico, and Costa Rica.