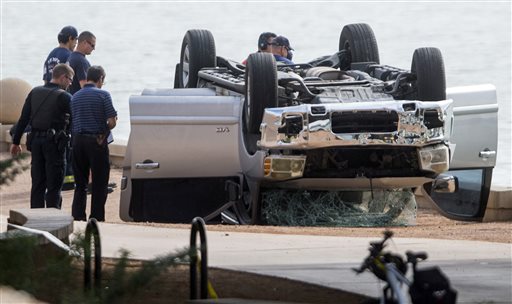 PHOENIX (AP) — The deaths of two adults and three young children who were in an SUV that plunged into an Arizona lake are being investigated as a murder-suicide as police said Monday that the father of the youngsters deliberately drove the vehicle into the water.

A grainy surveillance video from a nearby condominium complex showed the car being driven into the lake, Pooley said a news conference Monday night.

He said the video shows Baxter getting out of the SUV, walking down to the lake, then getting back in the driver’s seat and driving the vehicle “at a high rate of speed” before it hits a curb and flips over into the water.

“This was not an accident. Mr. Baxter took deliberate action,” Pooley said. “It’s absolutely horrific what happened to those little kids and their mother.”

Witnesses and officers jumped into the lake in a bid to rescue Baxter, 25-year-old Danica Baxter, and their three children, 1-year-old Zariyah, 2-year-old Nazyiah and 3-year-old Reighn.

The children’s great-grandfather had expressed his doubts earlier that the deaths were accidental, saying the children’s mother had declined her estranged husband’s attempts at reconciliation because he hadn’t addressed his anger management problems.

George Britt said it doesn’t make sense that the early-to-bed-early-to-rise mother would take her children out for a ride just after midnight. “She is never up at that time of the night,” Britt said. “Never, never.”

Pooley said investigators believe Baxter and his wife met late Saturday night to talk about their children and an argument ensued.

He said police found a handgun in the SUV, but it’s unclear if Danica Baxter was being held against her will at the time of the incident.

The couple married in April 2012, and relatives said they separated several months ago.

Tamika Franklin, an aunt of Danica Baxter, described her as an excellent mother who adored her children. “Everything she did was for her kids. Her kids were her life. She would never do anything to hurt her kids,” she said as she began to cry.

“I can’t explain it. It’s hard burying anybody but to bury a whole family at once I just don’t understand it,” she said, shaking her and tearing up.

The parents and the two youngest children were pulled from the vehicle and brought to a hospital, where they later died. Investigators then determined the couple’s oldest child was missing, and divers later retrieved the child’s body from the still submerged vehicle.

Broken glass and vehicle plastic could be seen Monday near the lake’s shore. Two bouquets of flowers and a stuffed animal also were placed nearby.