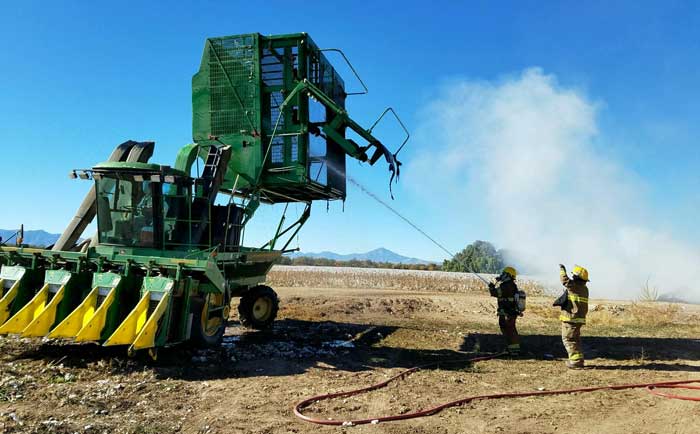 PIMA – A load of cotton was wasted but the farmer and his equipment will live to pick another day.

A local farmer lost an estimated $750 worth of cotton Nov. 30 after it caught fire while he was picking it. The farmer also estimated his John Deere four-row cotton picker suffered roughly $500 worth of damage during the incident. 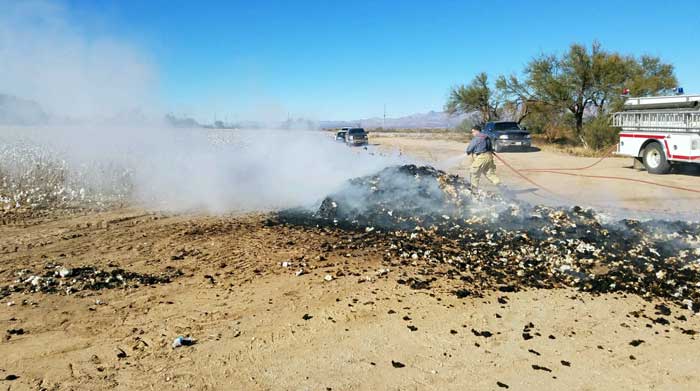 Contributed Photo/Courtesy Adam Hoopes: A Pima firefighter wets down a dumped load of cotton that was on fire.

Gathered cotton and cotton module fires can occur when a stone gets gathered up with the cotton. The friction of the stone being tumbled heats it up and can lead to smoldering the cotton to a point where it catches fire.

First responders were dispatched to a cotton field just west of Pima along U.S. Highway 70 at about 1:20 p.m. regarding a cotton picker on fire.

The farmer told authorities that he was picking cotton when he thought he smelled smoke. He stopped and checked but could not find the origin of the smell. There were other people burning in the area, so the farmer figured that was where the smell came from.

The farmer resumed picking, but after finishing a row he looked back and saw his gathered cotton and the picker was on fire.

He then pulled off the field and dumped the cotton in an effort to save his equipment. The Pima Fire Department arrived at the scene and doused both the picker and the blackened cotton.