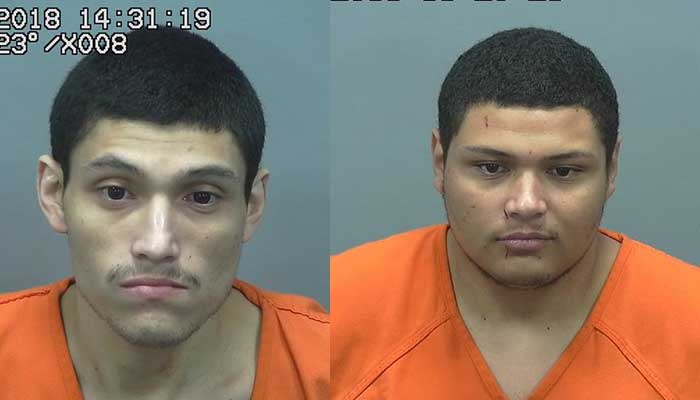 SAFFORD – Thursday, Feb. 15th, Safford police officers were dispatched to the 800 block of 13th Street in reference to a domestic dispute that ended up with arrests for disorderly conduct, domestic violence, possession of drug paraphernalia and an outstanding warrant.

When police officers arrived at an apartment where a family was gathered outside, they were told by a woman that her two sons, Delorenzo  Anzar and Elijah Anzar, had been yelling because she had told them that their girlfriends needed to leave the residence. As the officer was interviewing the men, they were informed over the radio by another officer that Krystal Espinoza, who has a felony warrant for her arrest, tried to climb out a back window. When two officers entered the bedroom where Krystal was, she jumped from the window onto a bed against a wall and tried to cover herself with a blanket. It appeared she could have been hiding something between the wall and bed. She would not comply with the officer’s orders and was handcuffed and taken into custody.

Delorenzo and Elijah were arrested for disorderly conduct. As Elijah was being searched, a pen was found in his jacket pocket with the end cap missing and it appeared to have residue inside the tube part of the pen. This item is commonly used to ingest illegal drugs.  After being read his rights, Elijah was asked why the end cap was missing. He said he had chewed on it earlier. When the officer asked about the residue, he said there was nothing in it, it was just a pen.

Krystal was taken to jail and booked on her warrant. Delorenzo and Elijah were taken to the police department to fill out paperwork. A test was conducted on the residue inside the pen. It tested positive for meth. The officer asked Elijah about the results and he responded that the reason it tested positive was because he had smoked meth two days prior and then chewed on the pen. Delorenzo was booked for disorderly conduct/domestic violence and Elijah was booked for disorderly conduct/domestic violence and possession of drug paraphernalia.