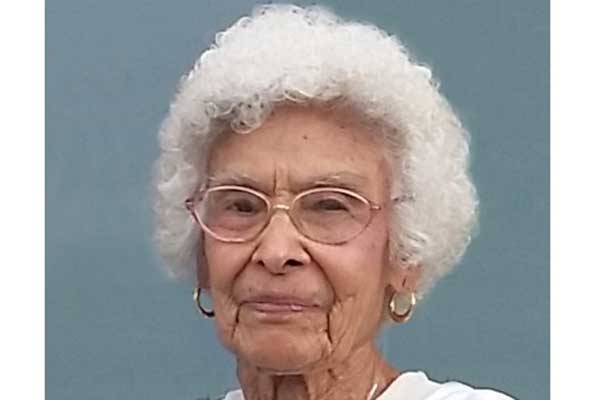 Esperanza “Espie” Mendoza, age 101, of Safford and formerly of Morenci, went to be with the Lord Monday, March 5, 2018, at the Mt. Graham Regional Medical Center, surrounded by her loving family.

Esperanza M. Mendoza was born to Jesus Mendoza and Francisca Martinez, on March 28, 1916. She was one of eight siblings. Espie attended Morenci schools. Though unable to graduate with her class because of an illness, she went back to high school, graduating with the class of ‘36.

In 1942 she started working for Dr. DeMoss, at the Lordsburg hospital. She worked in Lordsburg until her younger sister, Emma, became very ill with a ruptured appendix. She came home to care for her.

Espie and Lalo took the responsibility over the family after losing their stepdad, Conception Aguallo. She started working at the old Morenci Hospital in 1947, retiring in March of 1977. During that time she saw lots of her nephews and nieces come into this world. She also baptized many newborns that were born ill.

Espie and Lalo took care of their mother until her passing on June 29, 1978. They moved to Safford shortly after that. Espie became quite involved with St. Rose of Lima Parish. She helped with CCD from 1980-2005, she made her Cursillo #185 in June of 1987. She was the chairperson for the craft booth of Cinco de Mayo celebrations from 1986-2008.  She saw the changing of the Priest at St Rose of Lima, starting from Fr. Charles Knapp, Fr. Pinti, Fr. Ariel, Fr. Lucero, and of late, Fr. Rodriguez. She always gave to her church 110%. She was a strong woman, with a strong faith.

Espie saw many changes in this world, from different Popes, Presidents, Wars, black & white TV to color TV, wall phones to cell phones. She even had her own cell phone. She was always there for her family…Hard times and in good times… She loved to tell us stories of when she was younger. She told me of my grandfather, who I never met, that when he would get a little extra money he would go buy the family Mickey Mouse, he couldn’t pronounce popsicle, so he called them Mickey Mouse.

Espie never married, she and her brother, Lalo, took great care of their mother, then each other.

A Mass of Christian Burial for Espie was celebrated Thursday, March 8, 2018, at 1:00 p.m., at St. Rose of Lima Catholic Church by Rev. Robert Rodriguez. Committal followed in the Safford Cemetery.

Online condolences may be offered at viningfunerlhome.com