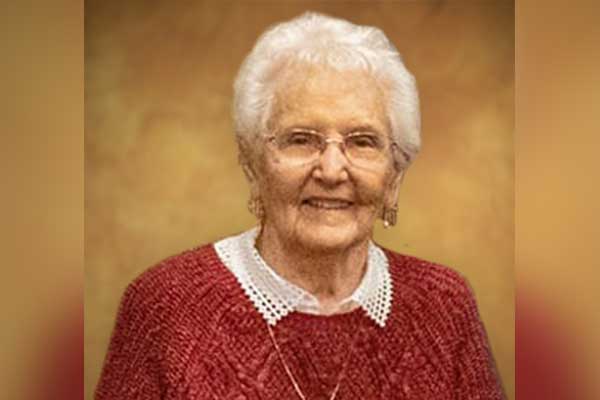 Elaine Martin Dallas, a resident of Central, passed into eternal life early Monday morning, December 28, 2020, at her residence, with her daughter at her side. Elaine was 98.

Elaine was born October 26, 1922 in Central. She was the oldest of eleven children born to Joseph Abner Martin and Mary Ann Jenkins.  Elaine attended schools in Central, Artesia, Pima, and Thatcher, later graduating from high school as the salutatorian in 1939 and from Gila Junior College (Eastern Arizona College) in 1941.  She worked at the college, the courthouse in Safford and the REA Co-op in Pima.

Elaine married Keith Dallas in August of 1947 and to their union was blessed with four children, Wayne (Roxanne), Robert, Yvonne and Vickie Winkel (Ron).  Their family relocated to Denver, Colorado in 1957.  Elaine worked for the State of Colorado for 21 years.  Following her retirement, she and Keith purchased a home in Central where she has wintered since 1993.

Elaine was known for crocheting, sewing, quilting, fiddling, family history, reading, bowling, her apple pie, and traveling with friends and family in her later years.

Funeral services for Elaine were conducted Tuesday morning, January 5, 2021, at 11:00 a.m., at Vining Funeral Home’s “Chapel of the Valley” by Kyle Kempton. Concluding services followed in the Central Cemetery.

The family suggests please send donations in memory of Elaine Dallas be made to the Caruso Family Charities, 9138 West 6th Avenue, Lakewood, Colorado 80215, carusofamilycharities.org, or at https://www.gofundme.com/f/memory-of-elaine-dallas?qid=6540ba20fafa19ae90be7092970a4e9f.