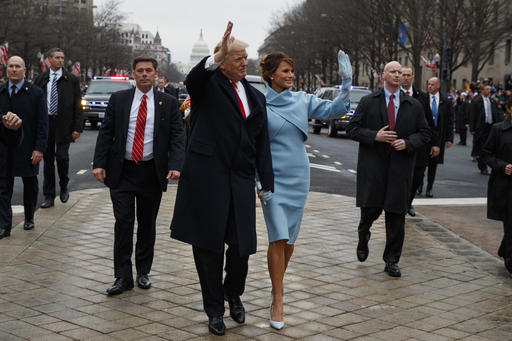 President Donald Trump and his wife Melania Trump walk along the Inauguration Day parade route after being sworn in as the 45th President of the United States, Friday, Jan. 20, 2017, in Washington. (AP Photo/Evan Vucci, Pool)

WASHINGTON (AP) — Pledging emphatically to empower America’s “forgotten men and women,” Donald Trump was sworn in as the 45th president of the United States Friday, taking command of a riven nation facing an unpredictable era under his assertive but untested leadership.

Under cloudy, threatening skies at the West Front of the U.S. Capitol, Trump painted a bleak picture of the America he now leads, declaring as he had throughout the election campaign that it is beset by crime, poverty and a lack of bold action. The billionaire businessman and reality television star — the first president to have never held political office or high military rank — promised to stir a “new national pride” and protect America from the “ravages” of countries he says have stolen U.S. jobs.

“This American carnage stops right here,” Trump declared. In a warning to the world, he said, “From this day forward, a new vision will govern our land. From this moment on, it’s going to be America first.”

The crowd that spread out before him on the National Mall was notably smaller than at past inaugurals, reflecting both the divisiveness of last year’s campaign and the unpopularity of the incoming president compared to modern predecessors.

Demonstrations unfolded at various security checkpoints near the Capitol as police helped ticket-holders get through. After the swearing-in, more protesters registered their rage in the streets of Washington. Police in riot gear deployed pepper spray and made numerous arrests after protesters smashed the windows of downtown businesses, denouncing capitalism and the new president.

At least one vehicle was set afire. 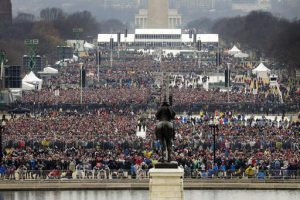 People stand on the National Mall to listen to the 58th Presidential Inauguration for President Donald Trump at the U.S. Capitol in Washington, Friday, Jan. 20, 2017. (AP Photo/Patrick Semansky)

Short and pointed, Trump’s 16-minute address in the heart of Washington was a blistering rebuke of many who listened from privileged seats only feet away. Surrounded by men and women who have long filled the government’s corridors of power, the new president said that for too long, “a small group in our nation’s capital has reaped the rewards of government while the people have borne the cost.”

His predecessor, President Barack Obama, sat stoically as Trump pledged to push the country in a dramatically different direction.

Trump’s victory gives Republicans control of both the White House and Congress — and all but ensures conservatives can quickly pick up a seat on the closely divided Supreme Court. Despite entering a time of Republican dominance, Trump made little mention of the party’s bedrock principles: small government, social conservativism and robust American leadership around the world.

He left no doubt he considers himself the product of a movement — not a party.

Trump declared his moment a fulfillment of his campaign pledge to take a sledgehammer to Washington’s traditional ways, and he spoke directly to the alienated and disaffected.

“What truly matters is not which party controls our government, but whether our government is controlled by the people,” he said. “To all Americans in every city near and far, small and large from mountain to mountain, from ocean to ocean, hear these words: You will never be ignored again.”

But the speech offered scant outreach to the millions who did not line up behind his candidacy.

Trump’s call for restrictive immigration measures, religious screening of immigrants and his caustic campaign rhetoric about women and minorities angered millions. He did not directly address that opposition, instead offering a call to “speak our minds openly, debate our disagreements honestly, but always pursue solidarity.”

While Trump did not detail policy proposals Friday, he did set a high bar for his presidency. The speech was full of the onetime showman’s lofty promises to bring back jobs, “completely” eradicate Islamic terrorism, and build new roads, bridges and airports.

Despite Trump’s ominous portrait of America, he is taking the helm of a growing economy. Jobs have increased for a record 75 straight months, and the unemployment rate was 4.7 percent in December, close to a 9-year low.

Yet Trump’s victory underscored that for many Americans, the recovery from the Great Recession has come slowly or not at all. His campaign tapped into seething anger in working class communities, particularly in the Midwest, that have watched factories shuttered and the certainty of a middle class life wiped away.

Trump’s journey to the inauguration was as unlikely as any in recent U.S. history. He defied his party’s establishment and befuddled the news media. He used social media to dominate the national conversation and challenge conventions about political discourse. After years of Democratic control of the White House and deadlock in Washington, his was a blast of fresh air for millions. 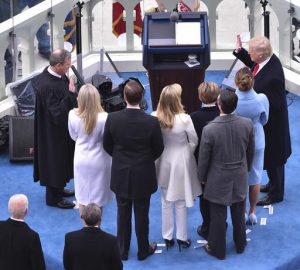 Donald Trump is sworn-in as the 45th president during the Inauguration on Capitol Hill in Washington, Friday, Jan. 20, 2017. (Ricky Carioti/The Washington Post/Pool Photo via AP)

At 70, Trump is the oldest person to be sworn in as president, marking a generational step backward after two terms for Obama, one of the youngest presidents to serve as commander in chief.

The 44th president, who will continue to live in Washington, left the city after the swearing-in ceremony for a family vacation in California. At a farewell celebration with staff members at Joint Base Andrews, he thanked them for having “proved the power of hope.”

While Trump bucked convention as a candidate, he embraced the pomp and pageantry of the inaugural celebrations. He was sworn in by Chief Justice John Roberts, reciting the 35-word oath with his hand placed upon two Bibles, one used by his family and another during President Abraham Lincoln’s inauguration. During an afternoon parade, he stepped outside the armored presidential limousine with Mrs. Trump and his 10-year-old son, Barron, to walk two brief stretches of Pennsylvania Avenue.

In a show of solidarity, all of the living American presidents attended the inaugural, except for 92-year-old George H.W. Bush, who was hospitalized this week with pneumonia. His wife, Barbara, was also in the hospital after falling ill.

But more than 60 House Democrats refused to attend Trump’s swearing-in ceremony in the shadow of the Capitol dome. One Democrat who did sit among the dignitaries was Hillary Clinton, Trump’s vanquished campaign rival who was widely expected by both parties to be the one taking the oath of office.

At a post-ceremony luncheon at the Capitol, Trump declared it was an honor to have her attend, and the Republicans and Democrats present rose and applauded.

While most of Trump’s first substantive acts as president will wait until Monday, he signed a series of papers formally launching his administration, including official nominations for his Cabinet. Sitting in an ornate room steps from the Senate floor, the president who had just disparaged the Washington establishment joked with lawmakers, including House Democratic leader Nancy Pelosi, and handed out presidential pens.

As evening fell, the Senate approved retired Gen. James Mattis to be Trump’s secretary of defense.