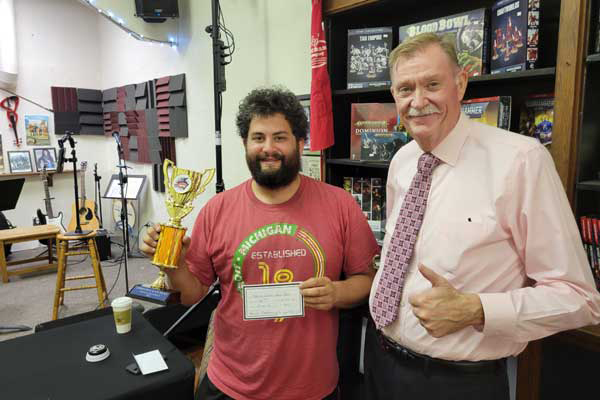 SAFFORD — Arizona Fan Fest Thursday Throwdown Trivia took place over five weeks in July, and there was a different winner each of the first four weeks.

Which meant the grand championship was open for anyone to win.

A dominating performance by David Eisenberg in the fifth and final round at the Gathering Scene at Candy’s scored him his second weekly win, and the Thursday Throwdown championship.

“It was a lot of fun; I enjoy this stuff,” Eisenberg said.

Eisenberg scored 725 points Thursday to give him a week-week total of 1,570 to take the win. He was followed by Vance Bryce, who finished with 1,236, Sam Ribakoff with 610, Monika Ragland with 570 and Kyleigh Becker with 525.

Eisenberg, a U.S. Forest Service employee working on Mount Graham, said he was happy he stumbled on the event.

“I was with my co-worker, we were just driving by, we saw this place on Main Street and walked in and trivia was going on,” he said. “We had literally been talking a couple of weeks before, ‘Is there anywhere in Safford you can do this?’ And so we walking in and stumbled upon it.”

“Arizona Fan Fest is all about having fun, so we were excited that we could do this at The Gathering Scene at Candy’s, which encourages people to hang out, play some games and have fun,” said Fan Fest organizer David Bell.

“In addition to The Gathering Scene at Candy’s we couldn’t have done this without our sponsors. The Wear, El Coronado, Gila Valley Made, The Plank and Marcia’s Garden all provided $25 gift certificates for our five weekly winners, and Trophies N’ Tees provided our grand prize trophy. We really appreciate their support for events like this on Main Street,” Bell continued.

Admission to Arizona Fan Fest 2022 will be free and the convention will take place in conjunction with the 2022 Safford Spring Festival — a wine tasting, art and history event — also taking place on Safford’s Main Street that same weekend.

The costume contests will take place Saturday, April 23, 2022, and participants in the age and group categories can sign-up that day at the convention. Cosplayers participating in the premier category — which features a $1,000 prize for first place — must pre-register at AZ Fan Fest Cosplay | GilaValleyCentral.Net. There is no cost to register for any of the costume contest categories.

Cosplayers, artists and writers, gamers, comic book publishers and retailers, sellers of collectibles and food vendors who wish to reserve space at Arizona Fan Fest 2022 can do so at AZ Fan Fest Vendor Reservations | GilaValleyCentral.Net. Spaces are $75 for each 10×10 space and there is no limit on the number of spaces a vendor may reserve.