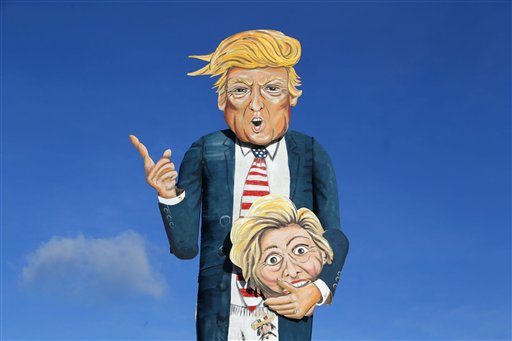 A view of the Edenbridge Bonfire Society celebrity effigy of US Presidential hopeful Donald Trump, after being unveiled in Edenbridge, England, Wednesday Nov. 2, 2016. The Edenbridge effigy always portrays a figure from the news, before being set afire on Britain's traditional bonfire night Nov. 5. (Gareth Fuller / PA via AP)

LONDON (AP) — A British town is burning a giant effigy of Donald Trump, holding the head of Hillary Clinton, at its annual bonfire celebrations.

Britons light bonfires and set off fireworks on or near Nov. 5 to commemorate Guy Fawkes’ failed plot in 1605 to blow up Parliament.

Organizers of the Edenbridge Bonfire Society say the U.S. presidential candidate was the overwhelming choice for this year’s celebrity effigy, which will go up in flames on Saturday to open the annual fireworks display.

The group, based in Edenbridge, south of London, is known for burning a huge celebrity effigy, stuffed with fireworks and newspapers, alongside the traditional figure of Fawkes.