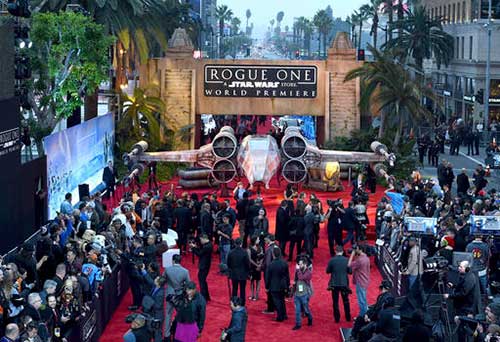 LOS ANGELES (AP) — The force is strong with “Rogue One: A Star Wars Story” according to early reactions from the film’s premiere Saturday night in Los Angeles.

Official reviews are under embargo until Tuesday morning in advance of the Dec. 16 release, but the crowd at the Pantages Theater went wild with applause as the credits rolled and took to social media to express their delight in the “Star Wars” spinoff film about the rebels who steal the plans for the Death Star. It’s set right before the events of the original 1977 “Star Wars.”

Comedian Dane Cook suggested on Twitter that it might be “the best” Star Wars movie, while Rainn Wilson called it “amazing.”

Actor Wil Wheaton said he hadn’t loved a Star Wars movie as much since the original.

Chris Taylor, author of the book “How Star Wars Conquered the Universe” wrote that the film was “heart-stopping and dark. Like darker than Empire Strikes Back dark.”

There had been some hand-wringing from fans about the spinoff film when the public learned that the production was undergoing expensive reshoots and bringing in veteran scribe Tony Gilroy to help out which the script.

Peter Sciretta, editor of the website Slashfilm.com, said that fans will be “very happy with Rogue One.” He added that it didn’t feel “neutered by reshoots.” Steven Weintraub, editor of Collider.com, applauded the film’s “incredible action” and script.