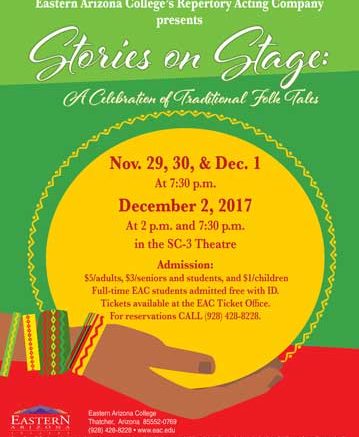 THATCHER — Everyone has been told a story which they wish could come to life. Well, now is your chance to see it happen right before your eyes.

After reading and researching folk tales from American, Native American, Hawaiian, Alaskan, and Mexican heritage, EAC’s Repertory Acting Company has devised an exciting performance for young audiences based on these magical stories. Each performance vignette has been written, adapted, and directed by a member of the company; and the sets, lights, costumes, props, and sound are being designed collaboratively by teams of company members.

Within one hour, the audience will travel around the world with Koko and Miki. Along the way, you will be caught in between the battle of lava and snow, meet a sneaky Wasachu, and participate in an intergalactic jazzercise workout. Along each stop of your voyage, you will find a moral in the story and learn about how something as big as an island can be created.

“The Repertory Acting Company’s production of Stories on Stage has been a blast,” said Bailey Bickmore, a sophomore at EAC. “We all worked together to produce really magical scenes onstage. This talented group of actors (have) truly brought these stories to life.”

The students took on the challenge of directing their own scenes as well. Freshman Emily Nagy explains more about her scene, “It feels amazing to create original work. For The Little Girl with the Iron Tail, I used the original folktale as source material and created a story that was curated for children. It ended up being something I am incredibly proud of.”

General Admission is $5 for adults, $3 for seniors and students, and $1 for children. Tickets can be purchased prior to the performance, and advanced reservations are recommended, as seating for this production is limited. To reserve your tickets now call Eastern Arizona College’s Box Office at (928) 428-8228. Don’t forget to bring your little ones to enjoy a fun and educational night with Eastern Arizona College’s Repertory Acting Company.