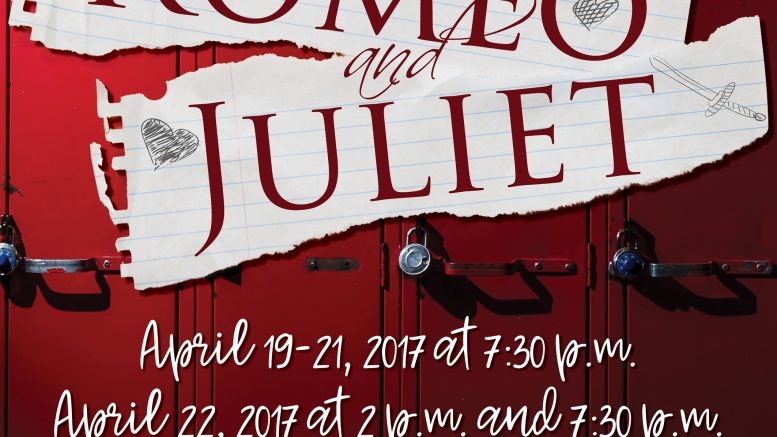 THATCHER — Eastern Arizona College’s Repertory Acting Company is proud to announce its original adaption of William Shakespeare’s Romeo and Juliet. This modern twist of an old classic will be performed outdoors in EAC’s Amphitheater, which is located in the middle of campus near the Academic Programs Building.  Performances are scheduled for April 19, 20, 21 and 22 at 7:30 p.m., with an additional, special matinee performance April 22 at 2 p.m.

Romeo and Juliet, the names of Shakespeare’s star crossed lovers, have become synonymous with young love and all the emotions and conflicts it can conjure. Audiences were first introduced to Romeo and Juliet in 1597, and now, more than 400 years later, Eastern Arizona College’s Repertory Acting Company is excited to share a new creative retelling of Shakespeare’s most celebrated tragedy.

Throughout the five acts of Romeo and Juliet, the feelings and events that occur hold true to many different types of relationships. Whether it is bitter rivalries between different groups or a secret rendezvous between forbidden lovers, the elements of Romeo and Juliet play out both comically and tragically in real ways. Through this play, Shakespeare has created an enduring testament to the truth that teenage love, though powerful, can also be overwhelmingly irrational. Actions committed in the name of love and even the sweetest of romances can come with a bitter aftertaste.

Every element of this production has been designed, staged and adapted by EAC’s Repertory Acting Company and will be performed by its members under the directing supervision of Amanda Striffolino.  The cast includes Cecilia Abarca, Bailey Bickmore, Ali Castro, Darcy Cochran, Cody Foreé, Lindsey Griffin, Shelby Hanks, Andrew Peterson, Shaelee Riding, Alyssa Ruiz and Devon Tyrrell.

Romeo and Juliet will be performed in EAC’s Amphitheater. General admission is $3 per person and is free for full-time students with student I.D.  Tickets can be purchased at the Amphitheater before each performance or by calling Eastern Arizona College’s Ticket Office at (928) 428-8228.  Come and celebrate Shakespeare, the classics and this enduring tale of love and loss.