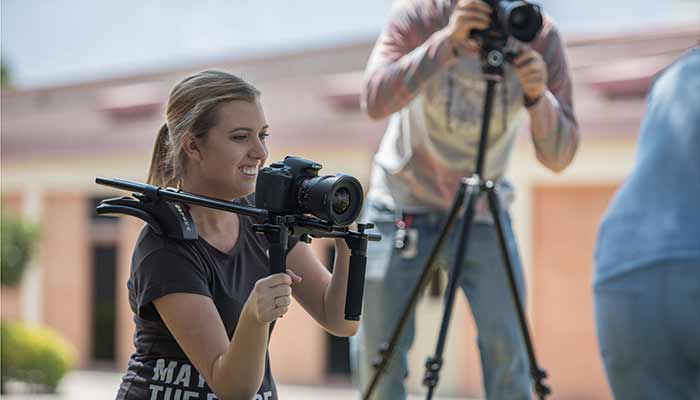 Thatcher, AZ—Eastern Arizona College media communications student Sarah Savannah Griffin submitted her short film Happiness to the Accolade Global Film Competition in La Jolla, California, earlier this month. Her film was accepted and will be viewed by a panel of award-winning industry experts and filmmakers later this month.

The Accolade Global Film Competition, established in 2003, is an innovative worldwide competition that strives to give talented directors, producers, actors, creative teams and new media creators a positive exposure in the filming industry. It discovers and honors the achievements of filmmakers who produce high quality films and projects across a multitude of genres.

The competition promotes award winners through press releases to over 40,000 filmmakers, industry contacts and additional international media/distribution outlets. Many of the award winners of the competition have gone on to win Oscars, Emmys, Tellys, and other awards.

“One of the greatest honors is to be recognized by experts in the industry,” said Griffin. “Initially, I submitted my work just for fun, not expecting to gain anything out of it. To be accepted out of the thousands of submissions is a complete surprise! The thought of it being viewed alongside potential Oscar-winning movies is unbelievable.”

After receiving the news that her film had been accepted, Griffin submitted her film into five other worldwide film festivals and is hoping to be notified later on in the month if it is accepted anywhere else.

“I couldn’t have done it without professor Cashetta, or the amazing Sean Goslin as my director of photography. Elyse Gomez and Joseph Norton were incredible as the lead roles, and I can’t wait to work with them on future projects.”

Griffin has been in EAC’s media communications program for her entire two years at EAC. She has worked closely with her fellow students, and was nominated as president of the Media Club in her second year at EAC. She will graduate in May, and has finished several applications to California universities, including USC and UCLA, to continue pursuing her film production degree.

For more information about EAC’s media communications program, contact the program director, Glen Cashetta, at (928) 428-8248 or by email at glen.cashetta@eac.edu.