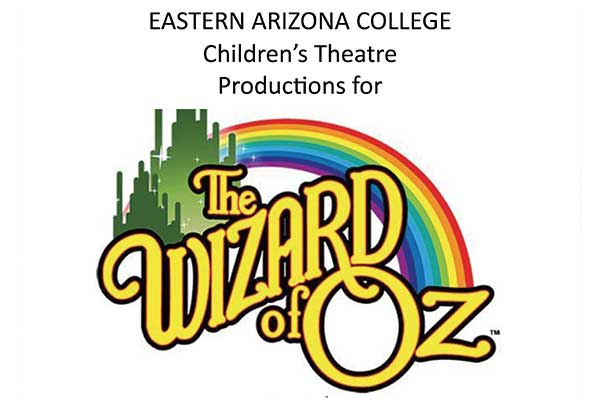 Thatcher Ariz. — Eastern Arizona College Children’s Theatre program is presenting Wizard of Oz as this semester offering. Because of the continued popularity of this troupe, the play will be performed with a double cast.

Cast One is starring Grace Dodge as Dorothy, Kate Rapier as the Scarecrow, Josh Jones as the Tin Woodsman, Hollen Hoopes as the Cowardly Lion, Archer Carlton as the Wizard of Oz, Courtney Hunt as Glenda the Good Witch, Lance Walker as Uncle Henry, Kennedy Tregaskes as Auntie Em, and Sarah Bauman as the Wicked Witch.

Cast Two stars Esther Wilson as Dorothy, Miley Preston as the Scarecrow, Joseph Bull as the Tin Woodsman, Camden Bryce as the Cowardly Lion, Jonathan Gabbitas as the Wizard of Oz, Halle Wittwer as Glenda the Good Witch, Garrin Gabbitas as Uncle Henry, Elizabeth Ortega as Auntie Em, and Lindsey Richins as the Wicked Witch.

“This play promises to be an evening of fun for the entire family,” said the director, Penny Whetten. “This is a super-great group of kids with lots of participation. This will be one of the most fun productions we’ve ever done.”

Admission to the play is $3/person and tickets are available at the EAC Ticket Office at 428-8228 or at the door.