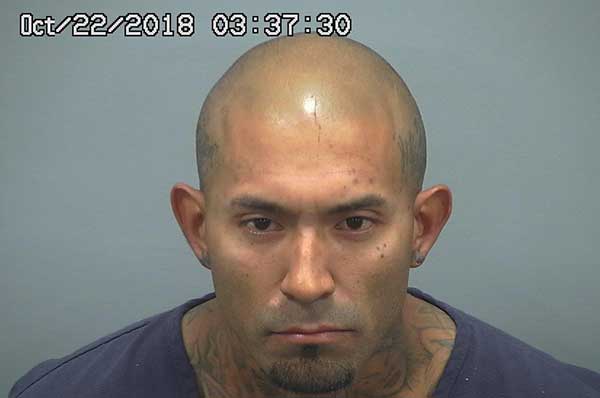 SAFFORD – On Sunday evening, just after 11:00pm, officers were dispatched to the area of 8th Avenue and Highway 70 in reference to a motor vehicle accident. When authorities arrived, they found a Jeep facing westbound with a heavy amount of damage to its front end, and several air bags had been deployed inside of the vehicle. A large utility pole had been knocked to the ground. A man standing near the passenger side appeared to be stomping and dragging an object on the pavement with his foot.

A witness approached the officer stating that the driver had tossed an object on the ground and was stepping on it. The witness also told authorities that a male passenger had jumped into a van and fled from the scene.

The officer contacted the driver of the Jeep who was identified as Anthony J. Alvarez. The officer asked Alvarez what was going on. Alvarez stated, ” I dozed off I guess” admitting that he had hit the utility pole. The officer noticed Alvarez was hyper active and animated as he spoke.

Authorities were informed by another witness that the passenger in the Jeep had fled the scene, and that the driver was attempting to get rid of a plastic baggie by stomping on it. As authorities looked in the area, a plastic baggie containing a white substance was located, which was recognized as methamphetamine.

Alvarez was asked if he had consumed any alcohol that night or if he had used any illegal substance. Alvarez denied having any alcohol, but admitted to using marijuana the day prior. His speech was reportedly quick and erratic, and his eyes were bloodshot and watery. Alvarez’s feet were fidgeting and he appeared to have a hard time sitting still. Alvarez had already been treated by lifeline staff,  and reported to the officer he had not been hurt. When asked, Alvarez agreed to perform some field sobriety tests, but was unable to finish, due to “feeling too shaky.” At that point, when he was asked, Alvarez stated he had used meth about a day or two ago. Based on the officer’s observations, Alvarez was placed under arrest for DUI and driving with a suspended license.

The officer showed Alvarez the meth that was recovered from the roadway, but Alvarez denied ownership. When an inventory of the Jeep was made, a baggie was found in the center console containing a green leafy substance, recognized as marijuana. Throughout conversations with Alvarez, he denied that there was passenger in the vehicle during the collision and stated he did not have a medical marijuana card. At one point Alvarez stated the marijuana belonged to a passenger, but then walked back his story and claimed ownership of the methamphetamine, the meth pipe and marijuana that was found. A short time later, Alvarez was asked about the passenger, and he was unable to give a name, but referred to him as, “cowboy.”

Alvarez was transported to the Safford Police Department for a blood draw and other DUI testing and then booked into the Graham County Jail.