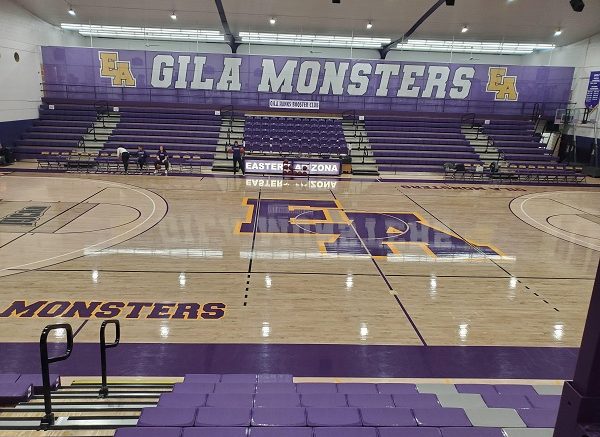 The Eastern Arizona College Women’s and Men’s basketball teams have reached the end of the regular season and with that comes the awards.

Women’s Basketball’s Danja Stafford was named ACCAC 1st Team, Region I 1st Team, and ACCAC Freshman of the Year.  Stafford led the conference in rebounds with 15.6 per game and was fifth in points scored with 16.6 per game.  She comes to Eastern from Orem, UT.

Susi Nomoa was named Region I 2nd Team.  Nomoa was second on the team with points scored with 11.0 per game and second with rebounds at 5.1 per game.  The freshman comes to Eastern from Lahaina, HI.

Anthony Anderson was named ACCAC 3rd Team and Region I 2nd Team.  Anderson was eighth in the conference in assists with 4.9 per game and scored 11.5 points per game.  The sophomore comes to Eastern from Indianapolis, IN.

Both hoops squads qualified for the postseason. The Eastern Men finished the regular season 24-6 and 16-6 in the ACCAC, good enough for the #2 seed in the Region 1 tournament. They will host #3 Mesa on Saturday, February 29th at 7:30pm. The Monsters swept the Thunderbirds in the regular season. The winner will play the winner of #4 Arizona Western vs. # 1 Cochise on Monday, March 2nd.

The EAC Women were third in the ACCAC this season with a 13-9 ACCAC record. They were 20-10 overall. They will travel to #2 Cochise on Tuesday, March, 3rd for the first round of the playoffs. The winner will play at #1 Central Arizona on Friday.