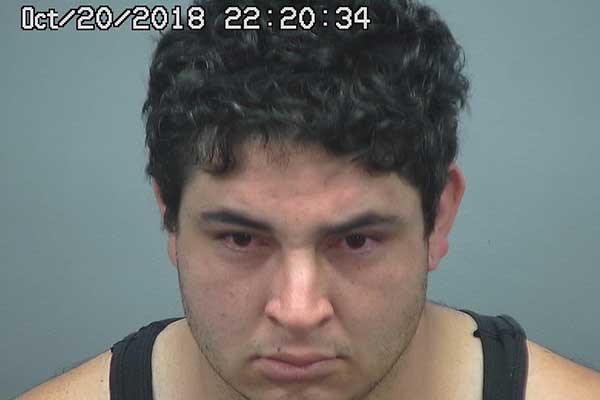 SAFFORD – Police were called to a convenience store on Thatcher Blvd last Saturday around 7:00 pm due to a disturbance from a male customer. When an officer arrived, the man was found outside the store near his truck looking through his property on the driver seat. The officer approached him and asked if he was okay. The man stated that he was fine and was just cleaning out his vehicle. The man was later identified as Nathan Navarrete.

The officer could see that Navarrete’s eyes were bloodshot and his pupils were constricted. When asked if he had been drinking or doing any drugs, Navarrete stated “no.” The officer noticed, however, that Navarrete could not stand still and was constantly grabbing for stuff in his vehicle. The officer asked for his ID, and Navarrete began searching everywhere in his vehicle for it but could not locate it. Another officer arrived to the area to assist, and a records check of Navarrete revealed a Felony warrant. The officers looked up the driver’s license number on the warrant and confirmed Navarrete’s identity by the photo on the license.

When the officer walked back over to Navarrete, the wallet he had been looking for could be seen in his back pocket. Navarrete was informed of his warrant and placed under arrest. The officer asked if he had anything on him. Navarrete reported that he might have something in his shoes. When he was searched, the officer located a cut straw with residue inside his right front pocket, and two balls of foil with burnt residue in his left front pocket. After being asked, Navarrete admitted he had used heroin two hours prior. The officer sat Navarrete in his patrol vehicle and removed his shoes. Navarrete then told the officer that there was nothing in his shoes, he didn’t want the officer to find the stuff in his pockets.

Navarrete was transported to the Graham County Jail where he was booked for his felony warrant in addition to possession of drug paraphernalia. In the jail, Navarrete reportedly admitted to using meth the day prior.