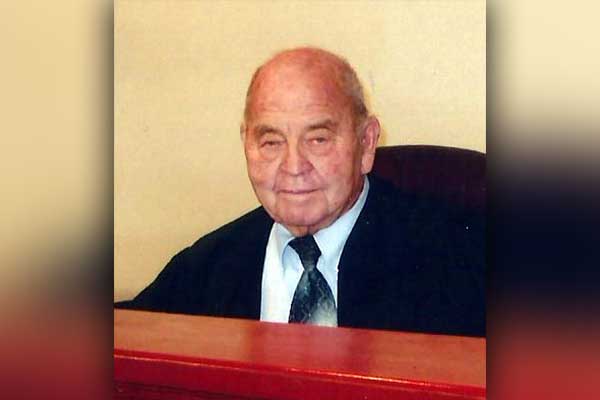 Dewey Lorenzo “Ren” Bryce, 92, passed into eternity on April 17, 2020, at his home with his loving wife, Sarah at his bedside where she has been for the past 67 years.  Dewey was born to Hazel & Dewey A. Bryce on December 16, 1927, in Fort Thomas, Arizona.  He grew up milking cows on the family dairy farm and helping his parents in the family store.  He was the oldest of nine children.

After graduating from Fort Thomas High School, he attended Gila Academy, (Eastern Arizona College), and then joined the U.S. Army.  He served during World War II in Japan, on General MacArthur’s staff as a technician.  After the war, he returned to Arizona and on to Arizona State College, (Arizona State University), where he earned his Bachelor’s Degree in Accounting.  He was a lifelong learner and encouraged all of his posterity to get a college degree.  While attending college, Dewey was introduced to a young lady from Buckeye named Sarah Hazen.  They dated and were married in the Mesa Arizona Temple for time and all eternity.

Dewey and Sarah started their new life together in Rodeo, New Mexico where they farmed cotton and alfalfa.  Dewey and Sarah welcomed five of their six children while living in Rodeo.  There they taught their children an appreciation for and the value of hard work.  Dewey served on the school board and drove a school bus in addition to his farming.

Dewey and Sarah relocated to Pima in 1966, welcoming their sixth child shortly thereafter.  Dewey worked as the Farm Foreman for the San Carlos Apache Tribe.  It was there he met his very good friend Harvey Pike, who preceded him in death.  Farming was always a part of his life.  Additionally, Dewey worked in Morenci at the Phelps Dodge Mine as a Teamster.  He also worked in various places around Arizona and Colorado, as a truck driver and construction foreman.  In his later years, Dewey served for ten years as Justice of the Peace for Graham County and was known for his compassionate, impartial rulings.

Dewey was a lifelong member of The Church of Jesus Christ of Latter-day Saints.  He served faithfully in a variety of callings but found the greatest joy working with the young men and serving as a home teacher.  Most importantly, he studied the Bible and the Book of Mormon with his sweetheart daily right up to the end.

He is preceded in death by his parents Dewey A. and Hazel Bryce, brothers Keith and Paul, sister Mary Helen, brother-in-law Bulan Weech, and grandson Tim Bryce.  We have no doubt that there were happy reunions when he went home to his Father in Heaven.

Special thanks to Dr. Susan Jones and the staff at the Gila Valley Clinic, and Raquel from Eden Hospice.

Due to the current COVID-19 pandemic, a private graveside service will be held at 9:00 a.m. on Saturday, April 25thwith social distancing observed.  A memorial service will be held at a later date. Graveside services will be streamed on Facebook Live.  Go to our page, McDougal’s Caldwell Funeral Chapel, like it, then scroll down a little and find the live stream of the services.Arrangements are under the direction of McDougal’s Caldwell Funeral Chapel & Gila Valley Crematory.  Online condolences may be extended at www.caldwellfuneralchapel.com.