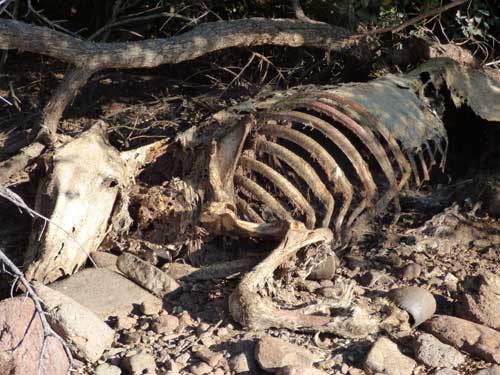 Photo By Dexter K. Oliver: A mule named "Little Bit" from the Clifton Ranger District in Greenlee County bears mute witness to the cruel death perpetrated upon it.

Residents of Greenlee County have been given notice of allegations of animal cruelty on the Clifton Ranger District (RD) of the Apache-Sitgreaves National Forest in a bare-bones fashion (pun intended). The story, however, needs some fleshing out before it becomes a “cold case” file, something the U.S. Forest Service (FS) seems to hope will happen with the passage of time. What is known is that two horses and one mule, purchased with tax payer dollars and entrusted to the ranger and range staff on the Clifton RD, were placed in a life-threatening position in May/June of 2016.

The pasture they were dumped in was meant to be a winter grazing area, as little or no forage is available in the summer before the monsoon. The unreliable water delivery source has been known in the district for decades. Livestock experiencing such conditions would need to be checked on daily but, even though the area is only a 25 minute drive north of the ranger station, gross dereliction of duty allowed not one, not two, but all three animals to perish.

Dying from dehydration, lack of food and exposure under the Arizona summer sun is not a good way to end one’s life, be it of man, horse or mule. Starting Jan. 1, 2016, the FBI, in conjunction with the National Sheriff’s Association and the Animal Welfare Institute, formulated a new decree. Under this, animal cruelty is now looked at as a “crime against society”. The FBI is currently collecting data on four categories of animal abuse/cruelty, the first of which is “neglect”. Their belief is that animal cruelty is very often an early indicator of future violent crimes.

Although the FBI still allows the states to handle these cases, its new rule is meant to encourage those same states to invoke harsher penalties for such incidents. It “sets the stage for police to crack down harder on animal abuse and neglect,” according to the decree.

Animal cruelty, as it is defined in Arizona Revised Statute (ARS) 13-2910 may be perpetrated by “intentionally, knowingly, or recklessly taking an action that mistreats or kills any animal without just cause”. One stipulation of animal abuse includes not providing adequate “shelter, food, water” for one’s charges. Each unwarranted death is considered a “Class A Misdemeanor, punishable by a fine up to $2,500 and/or imprisonment for six months”. Multiply that by three and serious charges are indeed required.

The FS, like all federal agencies, prefers to deal with malfeasance in-house as much as possible, even when state laws have obviously been broken. An agency investigating itself is always going to be suspect, and for good reason. Claims of transparency, in my long experience working for state and federal wildlife divisions, are only reluctantly followed through. Outside pressure is almost always necessary to fulfill any real sense of justice.

I have tried to use the Freedom of Information Act (FOIA) to learn more about the criminal neglect that led to the three dead steeds and been stonewalled in Washington, D.C., the FS regional office in Albuquerque, and the Apache-Sitgreaves Supervisor’s Office. The Greenlee County Sheriff’s Office, however, has been notified by a county supervisor that crimes were committed in Arizona and they have no need to wait for some federal in-house report.

The FS has had more than four months to prove culpability and show the public that they took appropriate actions but there has been no word from them. It’s a simple chain of command: the Clifton RD range staff, the ranger, and ultimately the forest supervisor had jurisdiction over the dead livestock. People dropped the ball and need to be held responsible or it is apt to happen again.

Meanwhile, the bones of “Snip” and “Diesel”, the two horses, and “Little Bit”, the mule, will litter FS lands for years to come and provide a stark reality.

Columnist Dexter K. Oliver has worked as a Forest Service employee on several different ranger districts in Arizona and New Mexico, including the Clifton Ranger District in the Apache-Sitgreaves National Forest.

The rest of the story: Local author pens tale of Greenlee County horse and mule deaths and the Forest Service’s involvement