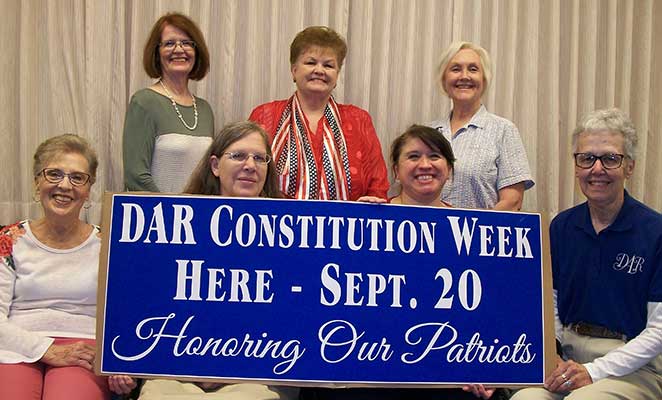 Have you ever known anyone in your lifetime who was directly related to an American Revolution patriot and heard in what ways they supported the cause for our nation’s independence? Here is your chance to meet members of the Daughters of the American Revolution in the Gila Valley Chapter who will honor those patriots in their family lines by sharing stories of courage and sacrifice. You will learn about the 5th & 6th generations of their great grandfathers and grandmothers who fought bravely on the battlefield and valiantly defended their own homesteads.

Since it is common to think of revolutionary patriots as mainly being soldiers, John Hancock, portrayed by John Hancock, will be present to tell about the risks he took in support of the American cause without going into battle.

After sharing these stories, details will be provided about a workshop being offered by the local DAR chapter in November for those interested in finding patriots in their family lines.

This program will also include the current generation by paying special recognition to high school winners of the DAR Patriotic Essay Contest. These students will share their patriotic values as they read their essays and answer questions from the audience.

Adding to this patriotic event will be Gary Burnett, an actual relative of George Washington and a devoted supporter of our nation’s Constitution. Gary will have his latest book, Why These United States of America Came To Be One Nation Under God, available for purchasing.

This event, co-hosted by Friends of the Library and DAR, will take place during Constitution Week on Thursday (Sep 20) 5:30 – 7:00 PM at the Safford City-Graham County Library. All are invited to attend; admission is free. Refreshments, with a patriotic flair and revolutionary flavor, will be served.