In mid-September, with the aroma of schoo fly pie, batches of hermits, molasses cookies and other patriotic delicacies, sixty-six people gathered at the Safford City-Graham County Public Library to share in the celebration of Constitution Week with the Daughters of the American Revolution Gila Valley Chapter and the Friends of the Library. 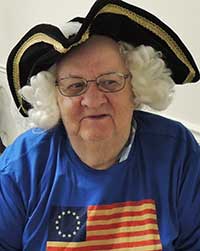 The evening began with Gary Burnett, well known as “Mr. Constitution”, sharing his love of our country with information about his most recent book and his passion for handing out booklets on the Constitution without any charge. The only requirement was that people sign a pledge that they would read the booklet.

The chapter then recognized the Safford High School winners of the DAR Patriotic Essay Contest and everyone listened to their essays on the topic of “What My American Heritage Means to Me as I go Forward to Serve as a Citizen of the United States.” 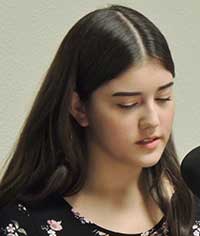 Nevaeh Pompeo, from the Junior Class, spoke of being raised in the U.S. Military lifestyle with her father in the Army and learning at an early age what it meant to truly love her country. Seeing the sacrifices on part of her father and the unconditional adjustments her mother made, she has become a passionate American. In her life time, she definitely intends to be supportive of those who gave up so much for the freedom we have today.  Her closing statement defined her patriotism. “You don’t have to be a soldier to be a hero, you just have to show some effort and give it your all.” 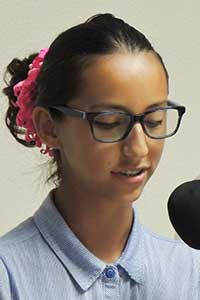 Kiara Schroeder of the Sophomore Class shared thoughts about the 4thof July as being a time to celebrate our freedom, being proud of what has been accomplished as a nation and recognizing those who have fallen in war for the things we can do today. She plans to enter the Air Force with hopes of being a fighter pilot to defend our country, to stand by fellow soldiers and continue to fight for our freedom. At the same time, she wants to give her all to younger children, to inspire them to be whatever they want to be in helping our world be a better place. Her closing statement summed up her beliefs. “If you want to change the world, then change the world. There are no limits. Nothing is impossible.” 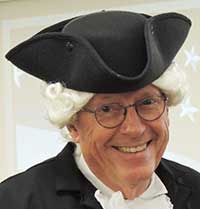 With those patriotic thought shared by the younger generation, the time-frame for the evening changed as the program went from the present back to the period of the American Revolution. John Hancock, portrayed by John Ratje, stepped forward in time to talk of Charles Thomson, who served as the secretary of the Continental Congress for fifteen years. In that time, his devoted efforts to record debates and decisions provided excellent continuity. As secretary, Mr. Thomson was regarded an emblem of truth. In disputes that took place during the Revolutionary period, his judgment was respected. Even though he was not widely known, he was one of America’s most significant and influential Founding Fathers.

Another way to make 1776 history come alive was done through presentations by members of the Gila Valley Chapter, who shared stories of their 4thgreat grandparents who were patriots. In the telling of their stories, the audience could see the spirit of those patriots passed down through the family lines to their current descendants. 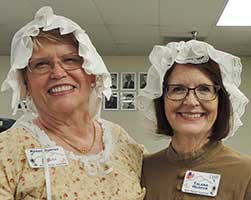 Renee Durfee and Talana Hooper, sisters from the Omer Smith family in Central, told of their family patriot, Henry Smith, who served in two Virginia militias. Later, with his wife, Mary Burks, and children they moved to an area along the Mississippi River near Fort Jefferson, Kentucky. He helped to protect the river from being controlled by the British and prevent Indian attacks encouraged by the British.

While Henry served in that capacity, his wife sewed uniforms for the soldiers at the fort. Both of them received recognition for their service as patriots. 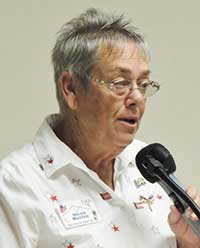 Helen Masten finished the program by telling about her 4thgreat grandfather, Thomas H. Springfield, Jr, who was part of a rugged family who lived in the back country of South Carolina and served as a captain of the militia.  While serving in that capacity, he met his future wife, Dicey Langston, who was a young, fearless spy carrying messages about the location of the British to her patriot brother and those fighting with him.

These two young patriots were strongly adamant about defending their country’s wish to be independent from England.  At the end of the war, they married, raised a family of 22 children and after their deaths, were buried next to each other in a family cemetery near Traveler’s Rest, South Carolina.

The evening ended with a revolutionary curtain call, which included all the participants in the program taking a bow of recognition in front of the United States flag for their part in sharing their love of patriotism and the history of this country.