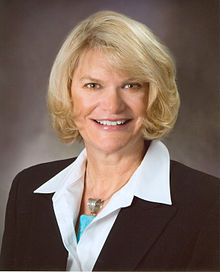 Lummis is the only female member of the rebellious House Freedom Caucus and plans to finish her current term. She has easily won re-election since first winning Wyoming’s lone spot in the U.S. House in 2008.

Cheney, a television news commentator, briefly challenged Wyoming U.S. Sen. Mike Enzi for last year’s GOP nomination. She cited health issues in her family in bowing out of the race more than seven months before the primary.

Cheney and her family have been living in Jackson Hole, an expensive resort community in northwest Wyoming, since 2012.

“I am taking a serious look at running and will be discussing this with my family and others around the state as I make my decision in the coming weeks,” Cheney told The Associated Press by email.

Lummis made her formal announcement Thursday afternoon at the state capitol.

“I came to Washington to be a reformer, not a career congressman,” Lummis, 61, said.

A former attorney, rancher, state legislator and state treasurer, Lummis said she’d been leaning toward retiring for the past year.

“It’s been a tough slog. There’s no doubt about it,” she said.

She is retiring in part amid her hope that Paul Ryan, newly chosen as House speaker, will do more to empower her colleagues to play a bigger role in crafting legislation, she said.

She also cited the focus Wyoming’s congressional race will get next year. No U.S. senators or statewide elected officials are due to be on the ballot in Wyoming.

“After that, I don’t know,” she said. “Will I ever seek public office again? I don’t know, let’s just leave it at that.”

“She has served us well because her heart and heritage are always here with us even when she is in D.C.,” Gov. Matt Mead said in a release.

Cheney, who has kept a low profile in Wyoming lately except for occasional speaking and book promotion engagements alongside her father, also praised Lummis’ performance in Congress.

Lummis is a conservative who’s been a defender of gun rights. She’s favored efforts to expand drilling for oil and natural gas and has opposed federal restrictions on hydraulic fracturing, or fracking, a controversial drilling technique.

She supported the proposed Keystone XL oil pipeline, which was to run from Canada to refineries along the Texas Gulf Coast. President Barack Obama rejected the plan last week.

Lummis also opposed the Obama administration’s plan to fight climate change, saying it will drive up electricity rates and cost jobs. Wyoming — the nation’s top-producing coal state — would need to cut carbon dioxide emissions about 37 percent from 2012 levels by 2030 under Obama’s plan.

“The plan ultimately will have a barely discernable effect on global temperatures and sea levels, and it’s reckless for the government to go ahead with it,” Lummis said.

Republican Sen. Mike Enzi said in a statement that he was sorry to hear of Lummis’ retirement.

“She is known on both sides of the aisle and gets things done,” he said. “She has been an essential part of our Washington team using her agriculture, business, legal, legislative and state treasurer background to make a big difference.”

The Freedom Caucus was instrumental in forcing the resignation of John Boehner, R-Ohio, as House speaker in September. The conservative group, which has around 40 members, complained that Boehner was not aggressive enough in challenging Obama’s health care overhaul and other policies.

Tim Stubson, a Casper lawyer and Republican state lawmaker, also said Thursday he intends to run for the seat.