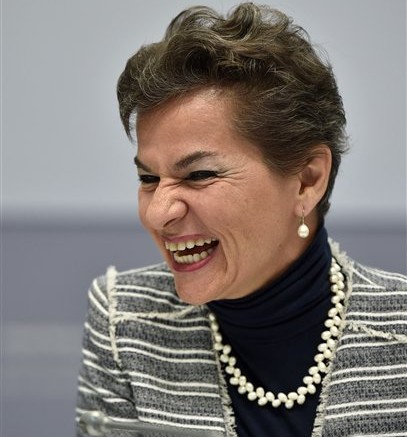 FILE - In this June 1, 2015 file photo, Executive Secretary Christiana Figueres smiles during the United Nations Framework Convention on Climate Change in Bonn, Germany. It's something climate negotiators and world leaders try not to talk about publicly: Whatever international deal that comes out of Paris climate talks likely wont be a treaty that needs ratification by a reluctant Republican U.S. Congress. (AP Photo/Martin Meissner, File)

WASHINGTON (AP) — It’s the elephant in the negotiating room that few officials want to acknowledge: Whatever international deal comes out of Paris climate talks, it likely won’t be a treaty that needs ratification by a reluctant Republican U.S. Congress.

That’s not the only complication in Paris. China, the U.S. and India don’t want the international community dictating their carbon dioxide emissions, but they do want to do something about ever escalating greenhouse gas levels and the rising temperatures they cause. So they have to come up with an agreement that doesn’t dictate binding, internationally set targets or require U.S. Senate approval — and yet gets the job done. At least partly.

To do so, they must reach a pact that has as many twists and turns as a pretzel.

“It’s a reality that the world is coming to grips with,” former Vice President Al Gore said in an interview with The Associated Press on Monday. “The design of the Paris negotiation is really driven in large part by the desire to get an agreement that does not have to go through the treaty ratification process. It’s all perfectly legal.”

Earlier this month at a press briefing a few blocks from the White House, U.N. climate chief Christiana Figueres was asked about Republican opposition to possible Paris climate agreements. Her response was a shrug and a dismissive, “Yeah, fine.”

But on Thursday, the carefully crafted dance to avoid the Senate exploded into a bit of international confusion.

U.S. Secretary of State John Kerry told The Financial Times that the agreement was “definitely not going to be a treaty” and there was “not going to be legally binding reduction targets.” That prompted French president Francois Hollande to object and say “if the deal is not legally binding, there is no accord.”

And here’s the twist: Both Kerry and Hollande can be right, said Nigel Purvis, an international lawyer who was a top environmental diplomat and international negotiator for Bill Clinton and George W. Bush. It’s an issue of definitions and the way an agreement is framed, said Purvis, who is president of the non-governmental organization Climate Advisers.

The U.S. Constitution and the rest of the world have different definitions of the word “treaty,” Purvis said. Elsewhere, a treaty is a binding agreement. But in the U.S., there are several types of international agreements and only 6 percent of them end up being formal treaties that require Senate approval, he said. The last international, Senate-approved treaty was in 2010.

The climate treaty, Purvis said, is likely to end up as an “executive agreement” like the 1945 Yalta Accord at the end of World War II. This requires only presidential approval.

“If you can end World War II, I think you can do a climate agreement where the only obligation is to inform the international community what you are doing and demonstrate to them that you are doing it,” Purvis said.

Experts expect different layers of agreements. The key is that more than 100 nations have already made pledges of what they would do, including the U.S. promise to cut emissions by about 28 percent. In addition, there will likely be an agreement that nations will do what they promise, meet again to ratchet up their emission cuts and set up a monitoring and verification system for those pledges.

Purvis said it probably will hinge on a 1992 international treaty, signed by President George H.W. Bush and approved by the Senate, that promised to do something about climate change; a decades-old U.S. air pollution law; a U.S. Supreme Court decision that said the air pollution law applies to carbon dioxide; and presidential executive action.

And it involves diplomacy that explains how non-binding international agreements can still be binding domestically, because the president is enforcing the Clean Air Act, Purvis said.

“Getting an international binding agreement is in the cards; what is then binding inside that agreement is what’s up for debate,” said Jennifer Morgan, global director of climate program for World Resources Institute.

“The beauty of diplomacy is that you could interpret things in different ways,” said John Reilly, co-director of MIT’s Joint Program on the Science and Policy of Global Change.

Matthew Lee and Donna Cassata in Washington, Angela Charlton in Paris and Karl Ritter in Stockholm contributed to this report.

Follow Seth Borenstein at http://twitter.com/borenbears and his work can be found athttp://bigstory.ap.org/content/seth-borenstein