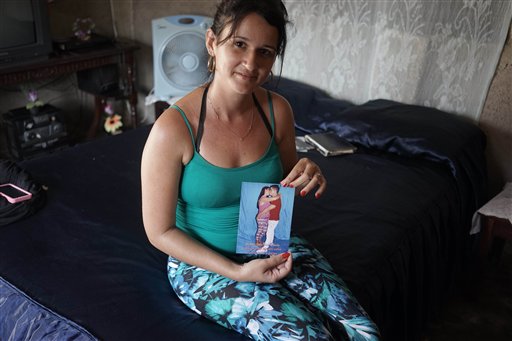 In this Sept. 23, 2015 photo, Yainis Souto, 25, poses for a portrait holding a photo taken of her with her then-boyfriend Jose Fuentes Lastre, before he fled Cuba with his stepfather on a raft in Camaguey, Cuba. After the news that Lastre and eight other men had landed in Florida, dozens of other young men and women in the familys neighborhood in Camaguey began building rafts, further accelerating the division of families and couples. Souto and Lastre broke up while they tried to maintain a long distance relationship. (AP Photo/Christine Armario)

CAMAGUEY, Cuba (AP) — On the 14th of September last year, nine Cuban men pushed their scrap-metal raft into the Florida Straits, started up its tractor-trailer engine and disappeared north into the night.

A few days later the rumors started in Camaguey.

A broken raft had washed ashore without a passenger in sight, one neighbor said. State security had arrested a group of male rafters, said another.

Olea Lastre did the math: The engine could push her husband, son, son-in-law and their companions through at least 10 miles of sea a day. It would take, at most, 10 days to reach Florida.

“I wondered if my father was cold or thirsty,” Lastre’s 30-year-old stepdaughter Yusneidi Cardenas recalled, her voice cracking. “I worried if they could even swim.”

On the 10th day, Lastre got down on her knees at 4 a.m. and prayed. If she didn’t hear that day that the men had survived, she knew she would go insane.

That afternoon, the phone rang. The women screamed.

The men had made it.

A year later, they and the loved ones they left behind anxiously wonder how long it will take to be reunited in the U.S. And the distance separating them is great and, in some ways, getting greater.

The Cardenas men were part of a wave of migration unseen in at least a decade.

Over the past two years, an estimated 100,000 Cubans have streamed into the U.S., legally and illegally, a marked flight from an island of 11 million. The majority fly to another country in Latin America and then make treacherous journeys by land to the U.S. border with Mexico. Thousands of others obtain family reunification visas and travel directly to the U.S. Those without money or relatives to help them flee on rafts.

The surge began in 2013 after the communist government eliminated the need for exit permits, and got bigger after Washington and Havana announced plans in late 2014 to end 50 years of hostility and re-establish relations between the Cold War foes. The reconciliation stirred fears that the U.S. would end its policy of accepting most Cubans who reach U.S. soil.

Nearly 4,500 Cubans reached U.S. soil in rafts, were caught at sea by the U.S. Coast Guard or were otherwise thwarted while trying to flee during the fiscal year that just ended, according to the Coast Guard. It said it intercepted 2,900 migrants in the waters between the U.S. and Cuba, the highest total since 1994.

The tide is not expected to ebb any time soon: More than 100 migrants tried to reach the U.S. in rafts in the first four days of November, compared with 207 in all of November last year.

The influx has swollen the ranks of Cubans who send home billions of dollars a year in cash and consumer goods, vital support for a struggling centrally planned economy. But it has also depopulated neighborhoods, exacerbated the country’s exodus of workers and professionals and accelerated the division of families.

Residents of the Mar Azul condominium in Key Biscayne, Florida, pulled out their cellphone cameras as Antonio Cardenas and the eight other men steered their raft toward the shoreline, a plume of diesel trailing behind them.

The men leaped from the vessel and sprinted toward the beach, knowing that under U.S. policy since the 1990s, those stopped at sea are turned back, while nearly all those who set foot on American soil can stay.

“Welcome to the land of liberty,” a maintenance worker at the condo said in Spanish.

The plan was clear, at least before the Cardenas men left: They would land in the U.S., get legal residency after about a year, and then, like so many other Cubans, bring over the rest of the family.

Within weeks the men were working odd jobs in Miami and sending small amounts home. The first major purchase the Cardenas family made was cellphones for the entire family.

For Yusneidi Cardenas, the phone was especially important. She was raising a 2-year-old alone and didn’t want Daikiel to forget his father, Maikel.

When Maikel called home, he and his son would babble back and forth in baby talk. Soon, the toddler started asking for his dad.

Then, seven months after the men landed in Florida, Cardenas got 38 text messages from a woman who said she and Maikel had met on Facebook and had begun a relationship.

“He put he was single and they met,” Cardenas said.

In a brief conversation that night, Cardenas said, her husband confirmed he was with another woman and hung up. She said he hasn’t tried contacting her again. Her son has stopped asking for his father, she said.

After the news that the nine men had landed in Florida, dozens of other young men and women in the family’s neighborhood in Camaguey began building rafts.

Men who once hawked bread on street corners or pedaled bicycle taxis suddenly disappear, and the explanation from relatives is almost always the same: They set out for the U.S.

Yoanni Guerra Garrido, 35, was on the raft with the Cardenas men before jumping out at the last minute. He has since tried to flee Cuba three times by sea.

Guerra estimated 200 people from Porvenir, a neighborhood of dusty streets and about 1,500 households, have tried to leave on a raft. He said about 40 have made it to the U.S.

“Some get turned back,” he said. “Others, it seems, disappear.”

“It’s sad and hard,” Guerra said. “You are thirsty, hungry and afraid because you don’t see anything but water on all sides. And it’s not a real boat. It’s a little piece of metal.”

Each time, Guerra was imprisoned and he and his wife were fined $3,000. Guerra said he is now harassed by authorities who follow his every move, making it difficult for him to work. He is trying to support his two children by raising pigs.

Olea Lastre, 46, a hairdresser, waits hours that seem like days in the blue-painted cinderblock home that her husband built. They stay in touch via telephone calls and emails.

Antonio Cardenas, 50, made a living in Cuba farming and selling merchandise on the black market. Now he writes his wife messages with subject lines like “You are my everything” between breaks at the meatpacking factory he works at in Oregon, where he and his stepson were resettled by a charity.

In June, their 18-year-old daughter, Olia Cardenas, began suffering fevers and severe headaches. Doctors suspected she had dengue, a life-threatening illness spread by mosquitoes. She was hospitalized and lost consciousness after an allergic reaction to the medication.

Lastre never told her husband how ill she had been.

“She almost died,” Olea Lastre said, running her fingers nervously over the floral tablecloth on their kitchen table. “I went through all of that alone.”

In February, Olea and the other women in Porvenir whose husbands were in the U.S. hired a teacher to come to the house twice a week and teach them English for $5 a month. They learned greetings and phrases to help them find jobs.

Still, there are days Lastre fears she will never see her son or husband again. She has nightmares about something terrible happening to them. Those are the days Cardenas consoles her.

“Don’t worry,” he tells her over the phone. “We are going to spend our old age together.”