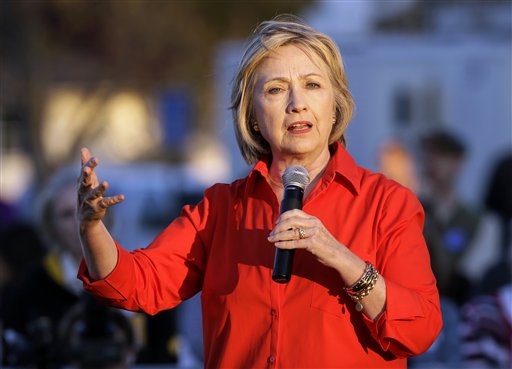 FILE - In this Nov. 3, 2015 file photo, Democratic presidential candidate Hillary Rodham Clinton speaks in Coralville, Iowa. State and local elections across the country this week produced warnings signs for both Democrats and Republicans as the parties press toward the 2016 presidential contest, now just a year away. (AP Photo/Charlie Neibergall, File)

LOS ANGELES (AP) — Hillary Rodham Clinton is facing a question with global implications as she seeks the White House: What do you call the husband of a U.S. president?

Appearing on “Jimmy Kimmel Live,” she offered a couple of ideas with a smile: “first dude” and “first mate.”

“We have to really work on what to call him,” she quipped.

Clinton could become the first woman in charge of the White House, and she said breaking barriers has been on the former president’s mind, too. She said her husband has told her that he’s determined to break the “iron grip” that women have had on being the spouse of a president.

Late-night comedy shows have been a staple for presidential candidates for years, allowing them to display a looser side for a younger audience that might not find time for a presidential debate.

Kimmel wanted to know if Bill Clinton would pick out the official china pattern for the White House, and a male sidekick dressed in a pantsuit gently ribbed Clinton for her signature wardrobe choice.

Clinton maneuvered around a question about the last time she was drunk — “a long time ago” — and didn’t appear to have much sympathy for the struggling candidacy of Republican rival Jeb Bush.

“It’s really hard to do this and people’s campaigns change,” she said. “You start with something, that doesn’t necessarily mean you’ll stick with it all the way.”

Clinton has been a favorite target of Donald Trump and other Republican candidates, but she told Kimmel the criticism is just election-season noise. Actually, Republicans like her, she said.

When she’s not on the ticket “Republicans say nice things,” Clinton told Kimmel.

“We have a long list of the nice things Republicans have said about me,” she added. “You may be hearing more about it.”

She wasn’t necessarily kind in return.

Clinton said watching the Republicans debate left her “being appalled and being amused.”

“I disagree with a lot of what they are saying,” she said. “I wish they would actually address the problems America is trying to face.”