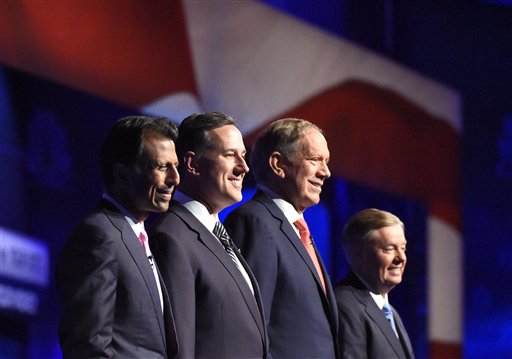 FILE - In this Oct. 28, 2015 file photo, Republican presidential candidates, from left, Bobby Jindal, Rick Santorum, George Pataki, and Lindsey Graham take the stage during the CNBC Republican presidential debate at the University of Colorado, in Boulder, Colo. Chris Christie could be relegated off the main stage at next week's GOP presidential debate and Bobby Jindal and George Pataki risk being shut out altogether, as the trio become potential victims of their poor showings in preference polling and how those polls are being used. (AP Photo/Mark J. Terrill, File)

NEWARK, N.J. (AP) — Chris Christie and Mike Huckabee have been bumped from the main stage at next week’s GOP presidential debate, while George Pataki and Lindsey Graham have been cut from the lineup altogether.

Debate sponsor Fox Business Network announced the moves Thursday evening, dealing a major blow to all four candidates, particularly Christie, the New Jersey governor, and Huckabee, a former Arkansas governor, as they struggled to stand out in the crowded Republican field amid signs of momentum in states where the first primary contests will be held.

The decision underscores concerns about the pivotal role that national opinion surveys have been playing in shaping the contest for the GOP nomination. Statistically, pollsters say, there is no significant difference between candidates lumped together near the bottom of the pack in national polls, which often have a margin of error of 3 percentage points or more.

“I tell people, ‘Ignore the national polls and just follow those early states,'” said Republican pollster Frank Luntz, who argues that early opinion surveys are notoriously unreliable. “Except that now national polls drive the debates, and debates drive the polling.”

According to debate criteria issued by Fox Business, candidates must score 2.5 percent or higher in an average of the four most recent major polls conducted through Nov. 4 to be featured in the prime-time debate. They must hit the 1 percent mark to qualify for an undercard debate airing before the main event.

As a result of the new standards, the prime-time affair will feature eight candidates — the smallest lineup so far. Ten candidates were featured in the party’s opening primetime debate in August.

Pataki, the former New York governor, and Graham, a South Carolina senator, already faced a tough road to the GOP nomination. Their omission from the undercard debates will make it even harder for them to convince voters — and donors — that they have a viable path to the nomination.

“It is ironic that the only veteran in the race is going to be denied a voice the day before Veterans Day,” Graham campaign manager Christian Ferry said in a statement. “In the end, the biggest loser tonight is the American people and the Republican presidential primary process that has been hijacked by news outlets.”

Former Texas Gov. Rick Perry provides a cautionary tale of the potential impact. Fundraising dollars dried up after Perry was relegated to the undercard debate earlier in the year.

During an appearance on Fox News earlier in the day, Christie seemed resigned to the fact that he might be forced into a match-up that has been derisively referred to as the “kiddie table.” After the announcement, Christie tweeted: “It doesn’t matter the stage, give me a podium and I’ll be there to talk about real issues.”

Steve Duprey, chairman of the Republican National Committee’s debate subcommittee, has been frustrated that debate criteria used by TV networks have ignored candidates’ standing in early-voting states where they spend most of their time.

“When you do debates based on national polls, it undermines the ability of a lesser-known, lesser-funded candidate to get traction,” said Duprey, a Republican national committeeman from New Hampshire. He suggested that Democrat Bill Clinton or Republican John McCain could have struggled to emerge under the current system.

At this time in 2007, polls showed that former New York Mayor Rudy Giuliani was far ahead of his closest challenger with the eventual nominee, McCain, in third. And Hillary Rodham Clinton was leading then-Sen. Barack Obama by about 20 percentage points.

The Republican National Committee, which coordinated many of the debate logistics, has been challenged by campaigns looking for more control.

Some lower-tier campaigns have been pushing aggressively for two debates featuring major candidates with each lineup determined at random. While networks have the flexibility to change their formats, such a scenario remains unlikely. More likely, according to campaigns involved in debate discussions, is that the undercard debate will be eliminated altogether as early as the GOP’s December debate.

Pataki called debate organizers’ reliance on national polls “a disservice to voters everywhere” and “a clear boost to the worship of celebrity over accomplishment and ideas.”

“The voters — not networks driven by ratings or national polls that are statistically irrelevant — should decide our next president,” he said after Fox Business Network announced the lineup.

After next week’s face-offs, just two debates remain before the opening primary contest in Iowa.

“I’m happy to debate anyone, anywhere, anytime,” Huckabee said. “We are months away from actual votes being cast and neither the pundits nor the press will decide this election. The people will.”