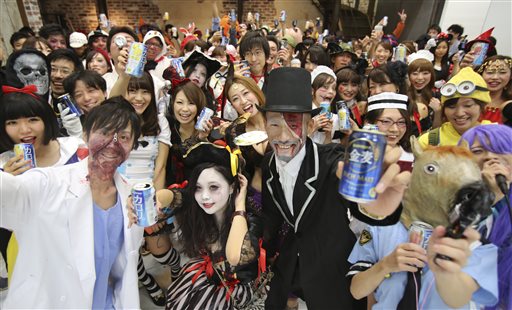 In this Oct. 24, 2015 photo, participants in costumes pose for a photo during a Halloween party event in Tokyo. The spooky celebration is consuming the energy, fashion sense and wallets of people for the entire month of October, not just kids but also adults on the prowl with colorful parades, costume parties and pumpkin-inspired desserts, dress-up and decor everywhere. (AP Photo/Koji Sasahara)

TOKYO (AP) — For the usually reserved Japanese, Halloween has become the perfect excuse to act wild in strange outfits.

The spooky celebration is consuming the energy, fashion sense and wallets of people for the entire month of October, not just kids but also adults on the prowl with colorful parades, costume parties and pumpkin-inspired desserts, dress-up and decor everywhere.

“When everyone is happy like this, I feel happy,” said Shoko Ushimaru, a game designer, wearing white makeup and a pirate outfit at a recent Halloween party in Tokyo.

She was in a room with a crowd of people, all in costumes. A DJ was playing music, but no one was dancing. The main attraction was getting photos taken under studio lighting, perfect for posting on social media such as Instagram and Facebook. Participants use such parties, popping up in recent weeks, for making friends and letting go of inhibitions.

Yoshi Kaseki, who heads the Japan Anniversary Association and studies the business potential of holidays, said Japanese don’t care about the cultural or religious backdrop of Halloween, or how it’s celebrated anywhere else. The biggest attraction is that anyone can take part, in contrast to Valentine’s, for instance, another holiday import that’s gained in popularity but which requires a lover or partner.

Over the last several years, the significance of Halloween has grown, although it’s still lagging Christmas in spending, according to Kaseki’s calculations of merchandizing and consumption. The fact that the holiday falls on a Saturday this year is a plus.

“You must think of Halloween in Japan as a totally different phenomenon from Halloween in the U.S.,” said Kaseki.

Although Japan has its own traditional festivals to celebrate spookiness and honor the dead, Halloween is being observed with a special frenzy. It helps that everything about it resonates in the country that gave birth to the subculture of “costume play,” the art of dressing up like “manga” animation and mascot characters.

Many Japanese don’t bother trying to look like the usual witches, zombies and ghosts associated with Halloween. Ask them what “trick or treat” means, and they usually won’t know. It doesn’t matter.

The Roppongi Hills shopping complex in Tokyo, where streets have been decked with bobbing pumpkin-shaped lanterns for weeks, is serving up pumpkin-theme pancakes covered with yellow coconut sauce for 2,980 yen ($2.50), as well as a 36 centimeter (14-inch) tall “monster” tower of five hamburgers for 4,860 yen ($4).

Yasushi Senoo, chief research analyst at Mitsubishi UFJ Research and Consulting in Tokyo, who has been studying the economic impact of Halloween, believes it can only get bigger in Japan because the largest participation is among teenagers. As they get older, their spending power will grow.

Right now, a million Japanese are estimated to be so-called “heavy” Halloween users, or those creating their own costumes and taking part in parades.

“Businesses are eager to use something that’s this well-known to everyone as an opportunity,” he said.

Japanese like to contemplate the changing seasons, and fall is one time without a cause to celebrate, according to Senoo.

That’s why Easter, with bunnies and painted eggs that appear conducive to costume play and merchandising, isn’t likely to take off as easily because spring already has plenty of action, with school and work starting, in Japan.

One area Halloween was likely to grow in coming years is in home decoration, he said.

“Halloween has potential for growth because it is so open-ended,” he said, unlike Christmas, for which the market has reached saturation levels. “New Japanese forms of celebrating Halloween can develop.”

Halloween madness culminates Saturday in Tokyo’s Roppongi area, with thousands of carousers on the streets in various outlandish costumes. Those in regular clothing would be certain to feel out of place.

“What’s fun is that this is all so unreal,” said party organizer Takahisa Takeishi, a young man who managed to look far more effeminate than his usual self with a purple wig dressed up as Gakupo or Gackpo, a virtual singer or vocaloid. “We can’t look like this every day.”