Translated as the fifth of May, Cinco de Mayo is a celebration on May sixth and seventh this year at the St. Rose of Lima Catholic Church. Sometimes mistaken as the Mexican Independence Day, Cinco de Mayo is in fact the celebration of the Mexican army’s unlikely victory over French forces at the Battle of Puebla on May 5, 1862. The battle occurred in the aftermath of the Mexican-American War of 1864. During the year 1861, the French invaded Mexico with a well-armed fleet. Moving toward Mexico City, the French troops encountered the Mexican resistance fighters. However, the French forces were roughly 6,000 men strong, and the Mexican army had only 2,000 men.  Although they were outnumbered, the Mexican army managed to crush the invading French army.  Even though it was not a strategic win for the Mexican army, it bolstered the moral of the people so much that the victory is still celebrated till this day.

The French Invasion is now a faraway history to many, but the Cinco de Mayo celebration is still a time of community pride and togetherness. Victor Ornellas, Chairman of the St. Rose of Lima Church, says that even though Mayor Chris Gibbs recently proclaimed May fifth as the Cinco de Mayo holiday in the city, the celebration has been going on locally for over thirty years. “People started coming together, and the parade started over thirty years ago.”

This year the newest event will be fireworks after the mass on May seventh. As always, there will be a parade at ten o’clock on Saturday the seventh at the Graham County Court House. The fiesta will start at eleven o’clock at the St. Rose of Lima Catholic Church. The Mariachi Corazon De Tucson will be performing under the direction of Jaime Valenzuela. Although these are some of the highlights, all of the Gila Valley comes and participates in the yearly fiesta. “It’s the community coming together, and I mean everyone comes together. We include the talent which are here, the Gila Valley Idol winners,” Ornallas stated, “We always try to include Boy Scouts and Girl Scouts and marching units that come down and participate.” As always, it is a fiesta put on by the community to benefit the community. “We’re a community. We put on the event, but you should be able to benefit from it in some way as well,” Ornalles said, “We’re a community, and we help everybody.” As one of the highlights of the year, the Gila Valley is preparing for the fiesta with the excitement of tradition, and a community brought together. We all look forward to this year’s Cinco de Mayo celebration, and the future celebrations in years to come. 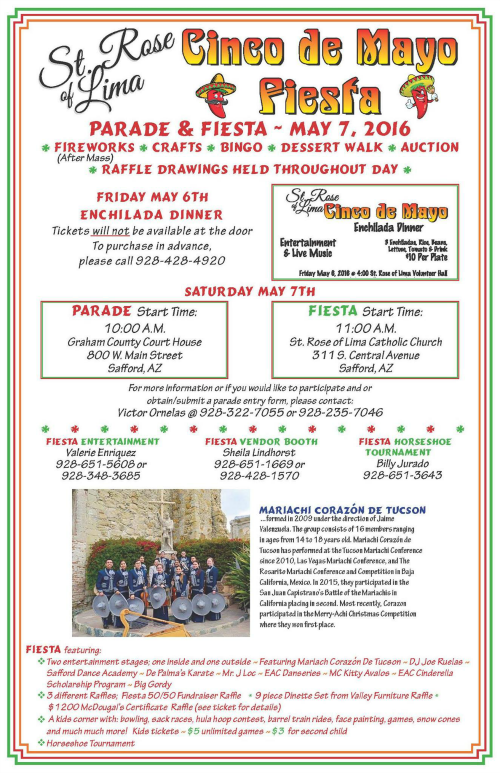