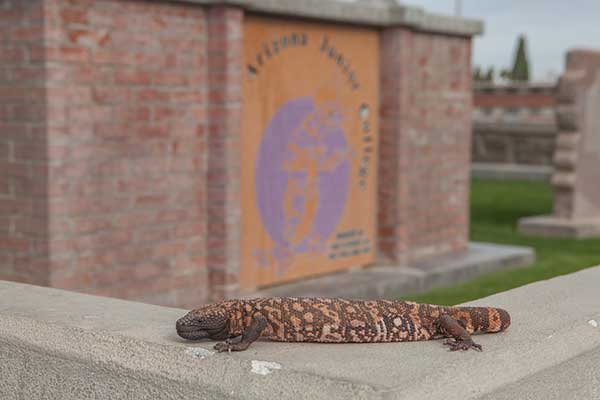 THATCHER, AZ—Eastern Arizona College was first organized in 1888.  In 1947, Earl Gooch, an EAC student, was working as the editor of the Gila Hoot Owl, a student newspaper.  He approached his advisor, Jerry Stone, about establishing a mascot. Stone contacted Reg Manning, a cartoonist working for the Arizona Republic, who drew the first sketch of Gila Hank, the six-shooter-toting Gila monster.  In 1948 the Gila monster was adopted as the College’s mascot.

Current EAC biology instructor Aaron Burk has been working with the Arizona Game and Fish Department (AZGF) to obtain an educational live specimen of this exciting native species.

His efforts have paid off, and now, for the first time in its 127-year history, the College has come into stewardship of a 4-year-old, female Gila monster, and is seeking the help of the entire community in choosing her name.

“We have had our approval for a while,” said Burk. “But then we had to wait for an animal to become available through Game and Fish. That finally happened for us in mid-December.”

The contest to name the Gila monster was kicked-off at this year’s Sci-Tech festival where everyone in attendance was invited to submit a name.

Burk and his team compiled a list of some of the top name suggestions. Community members are invited to vote for their favorite name or even propose a new one at https://www.surveymonkey.com/r/gilamonster.

The Gila monster will spend the summer in her temporary quarters before being placed on display in the Math/Science Building later this summer.