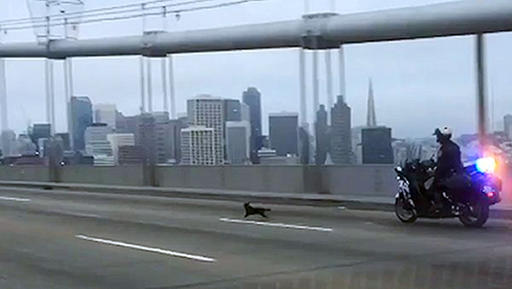 In this frame from video provided by the California Highway Patrol, Officer G. Pumphrey pursues a male Chihuahua running loose on the San Francisco-Oakland Bay Bridge in San Francisco Sunday, April 4, 2016. This image was made from a patrol car running a traffic break to keep cars from passing. Officers finally corralled the dog, then posted images on their Facebook page seeking the public's help in finding the owner.(California Highway Patrol, via AP)

SAN FRANCISCO (AP) — A Chihuahua is in animal custody after leading police on a chase across the Oakland-San Francisco Bay Bridge.

The California Highway Patrol tweeted the small black dog “led us on quite a chase” Sunday and posted a video of it running furiously on the upper level of the bridge while being trailed by a motorcycle officer.

After it was captured, the Chihuahua was taken to a San Francisco animal shelter where staff members named it Ponch, after the CHP Officer Frank Poncherello played by Erik Estrada in the TV series “CHiPs.”

A spokeswoman for the city’s Department of Animal Care and Control said the dog wore a tag decorated with a human skull, but it had no identification. Deb Campbell said the dog was recovering from its misadventure.