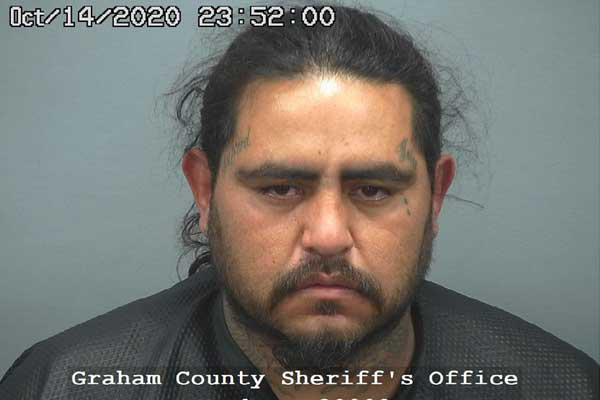 SAFFORD — A man attempting to elude police wound up knocking down a row of powerlines before his eventual capture.

Safford Police spotted Jesus Vasquez in a vehicle at a convenience store. There was an active warrant for Vasquez’s arrest but, before the officer could make contact, Vasquez sped off. The officer gave chase until Vasquez reported smashed into a power pole, pulling down others.

Vasquez and two others in the vehicle then ran off, with the officer initiating a foot pursuit of Vasquez. After hopping two residential fences, the officer was able to take Vasquez to the ground and place him in handcuffs.

Other officers attempted to search for the other two — identified as Fernando Gallegos and Cody Gann, both of whom also have active warrants for their arrest — however, neither had been located as of this time.

Vasquez was booked into Graham County Jail on charges of unlawful flight, criminal damage, resisting arrest and driving on a suspended license.