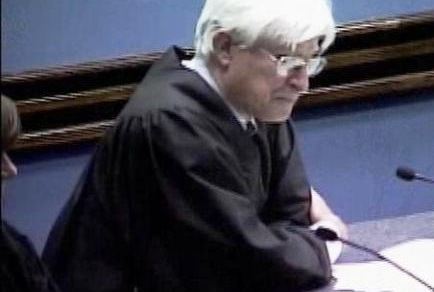 GREENBELT, Md. (AP) — A former Maryland judge who pleaded guilty to a civil rights violation for ordering a defendant to be physically shocked in his court is scheduled to be sentenced.

Robert C. Nalley of La Plata, Maryland, is set to be sentenced Thursday in federal court. Nalley faces a maximum sentence of a year in jail and a fine of up to $100,000. But according to a plea agreement he entered into in February, both prosecutors and Nalley’s lawyer will recommend a sentence of one year of probation.

Nalley acknowledged in the agreement that in July 2014 he ordered a deputy sheriff to activate a “stun-cuff” a defendant was wearing around his ankle, leading the defendant to fall to the ground and scream. Nalley acknowledged as part of the plea deal “that the use of the stun cuff was objectively unreasonable under the circumstances.”

Nalley ordered the shock during jury selection after the defendant, who was representing himself in a criminal trial, objected to Nalley’s authority to conduct the proceedings. After the man repeatedly ignored Nalley’s questions and his commands to stop speaking, Nalley told the deputy sheriff to activate the “stun-cuff.”

“Do it. Use it,” Nalley said, according to the plea deal’s statement of facts.

The defendant stopped speaking when the deputy sheriff approached him and activated the device, which administered an electric shock for about five seconds.

Nalley was a judge in Charles County from 1988 to September 2014. The Maryland Court of Appeals rescinded Nalley’s ability to hear cases several months after the incident.

This is not the first time Nalley has been a defendant. In 2010, he pleaded guilty to tampering with a vehicle after he deflated the tire of a cleaning woman’s car that was parked in a restricted zone at the courthouse. As a result, he was fined, had to write a letter of apology and was suspended for five days without pay.