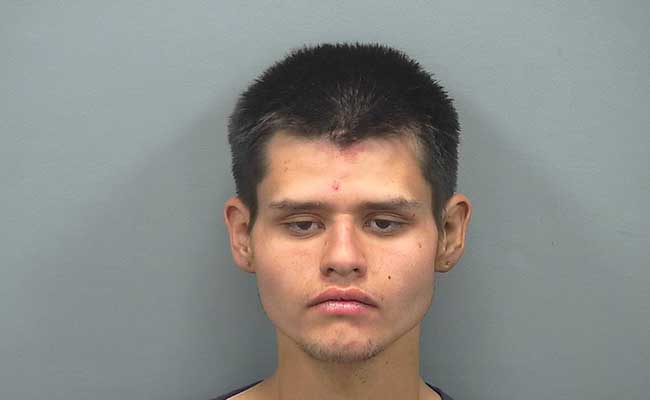 SAFFORD – On Sunday around 2:45 pm, officers were dispatched to Western Refining on Highway 70 regarding an unauthorized person on the premisis.  Authorities arrived and spoke with the reporting party who stated that as they were fueling up their semi truck, a man entered the fenced area. The area is surrounded by a 10 foot high chain link fence outlined with razor wire. The officers were canvassing the surrounding area to locate the individual.

An employee pointed out to the officers that a man had gone over to a building on the east side of the fenced yard. An officer was provided the gate code to enter the yard, and when the officer saw the man, he recognized him as Michael Holloway. The officer used a row of semi trucks to conceal himself until he was able to get closer to Holloway without being seen. As the officer approached Holloway giving him verbal commands, it was then noticed Holloway had something in his hand – an uncapped syringe. Holloway was holding the syringe with the needle protruding from the bottom of his pinky finger, similar to someone holding a knife or dagger. The officer drew his taser and instructed Holloway to drop the syringe. After several commands, Holloway dropped the syringe. Holloway was placed under arrest and instructed to get on the ground, however, he refused and began walking away.

Holloway then began reaching around his waist area where the officer could no longer see his hands. Holloway was told if he didn’t get on the ground he would be tased. Holloway reportedly replied, “Do it!” The officer deployed the taser into Holloway’s chest, and he fell to the ground. Holloway continued to refuse to follow the officers commands to get onto his stomach. Instead, Holloway kept trying to get up. The officer struggled with Holloway as he kept trying to grab for things and then kept his hands under his body out of the officers grasp. Even after he was handcuffed, Holloway continued trying to get up and rolling around, which caused the officer’s finger to become twisted in the chain on the cuffs. The officer was able to free his finger after giving Holloway commands to stop rolling around.

Another officer was able to enter the yard in their patrol car to assist in placing Holloway in the patrol vehicle. After authorities retrieved the syringe Holloway had dropped, they asked him what it was used for. Holloway stated he didn’t know what they were talking about. Holloway was transported to the hospital while an officer spoke with witnesses.

Witnesses reported that Holloway must have jumped over the gate because it is the only place without razor wire, and the man who was filling his semi truck had not seen anyone walking around him in the yard. The witness stated Holloway had walked over to United Rentals and spoke with an employee and then returned to Western Refining inside the fenced yard. Holloway then got into the witnesses’ personal truck that was parked nearby. The witness figured Holloway must have seen the police or figured he had no where to go because he just got out of the truck and walked out of sight.

The employee at United Rentals reported Holloway had asked him if he could get his drill he had left inside. The employee told him no and Holloway walked back to the Western Refining and got back in the fenced yard.

At the hospital, when the officer asked Holloway what happened that day and why he was at Western Refining, Holloway stated he couldn’t remember and didn’t know what the officer was talking about. Holloway had the same response when he was asked about the syringe he had been holding. It seemed to the officer Holloway was under the influence of drugs as he would have mood swings and authorities had been called on him earlier in the day because Holloway was reportedly hallucinating, thinking cars were watching him.

The officer noticed the track marks on the inside of Holloway’s arms. When the officer would ask Holloway questions, he would either not answer or state he didn’t know what they were talking about. After Holloway was medically cleared by the hospital, he was transported to the Graham County Jail. While the officer was completing the booking paperwork, a commotion in the search room could be heard. When the detention staff was searching Holloway, an uncapped syringe and a bag with a white crystal substance inside were located in his sock/shoe area. The syringe appeared to have blood in the tube area.

After Holloway was secured, the officer asked why he had not mentioned the items, knowing  he would be searched at the jail. Holloway held his head down and shrugged his shoulders and would not answer any more questions. Holloway was booked for Burglary, Resisting Arrest, Possession of Drug Paraphernalia, Possession of Dangerous Drug, and Promoting Prison Contraband.