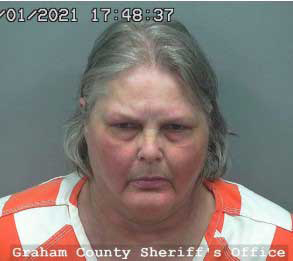 LITTLE HOLLYWOOD — A dispute over who could use the car wound up with a mother and son both booked into jail.

Safford Police responded to the 900 block of Hollywood Road for a call of a stolen vehicle. The reporting party, Cheryl McCaffery, said her adult son had taken her vehicle without her permission.

While officers were on scene, McCaffery’s son, Steven Marsh pulled up and officers reported McCaffery ran to the vehicle and started punching Marsh in the face.

Officers handcuffed McCaffery and placed her in the back of a police vehicle. Marsh told officers he had McCaffery’s permission to use the vehicle but had it out longer than originally planned.

During questioning, McCaffery eventually admitted she had given permission for Marsh to use the car. Officers explained the incident was now domestic violence due to her striking her son and she was being taken into custody.

When officers were securing her vehicle, McCaffery said she had a spare key in her bedroom, but didn’t want officers to go in to retrieve it as there may also be drug paraphernalia in the room. Officers secured the key.

Meanwhile a records check found Marsh had an outstanding warrant for his arrest, and he was also taken into custody.

Both McCaffery and Marsh were booked into Graham County Jail without further incident.