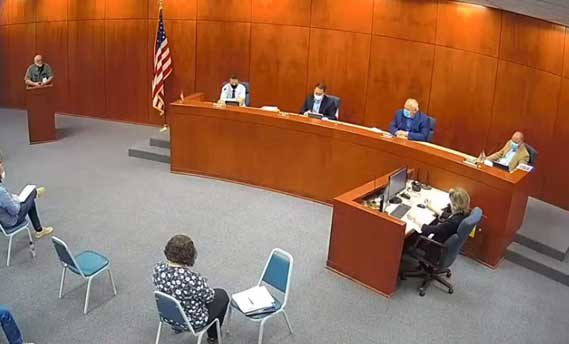 The Graham County Board of Supervisors hears a presentation from Zoning Director Steve McGaughey, left, on a proposed re-zoning that would allow a marijuana grow in Eden. The board voted unanimously to re-zone the property. - Contributed Photo

SAFFORD — The first large grow of marijuana in Graham County got the green light from the Board of Supervisors.

During Monday’s meeting, the board unanimously approved a re-zoning of six parcels of land in northwest Eden from general land use (A) to unlimited manufacturing land use (M-X), the zoning the county has designated for growing of cannabis.

“Mr. (Clint) Colvin (the applicant), as a farmer and as a citizen, he has the property rights and so my intent is to, since the state and the voters in the state have voted to approve it, my purpose is to uphold Mr. Colvin’s property rights,” said Supervisor Paul David, D-Dist. 1.

The applicant originally intended to conduct the grow and processing of cannabis outdoors, but Planning Director Steve McGaughey told the board the plan is now to grow and process within hoop houses on the property. All other security measures as required by the state remain the same.

“They’ve been very diligent in their work. In this county we have ordinances that we’ve passed and they’ve complied with each and every one of them. We have to set our moral obligations aside and go with what the law states and what our ordinances state. I believe they have done that in all aspects; they’ve kept us abreast of any changes. So moving forward, I wish them the best,” said Supervisor John Howard, R-Dist. 2.