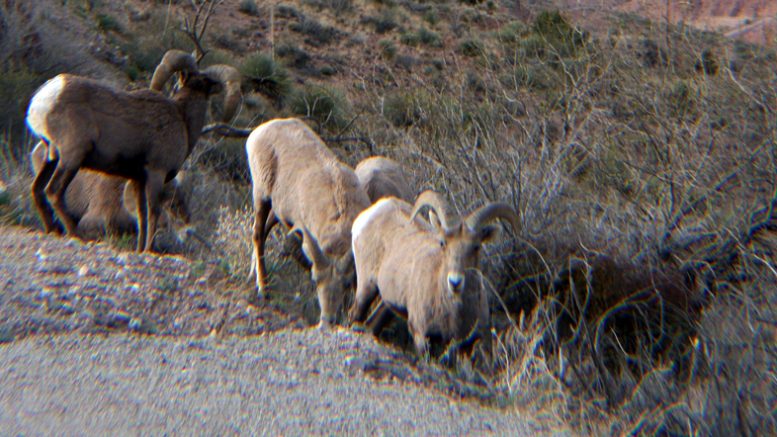 Photo By Walt Mares: A Rocky Mountain Big Horn ram remains vigilant as other sheep graze along the road across from the Conoco convenience store in Morenci on Feb. 6. The hustle and bustle of shift change activity at the store did not seem to bother the sheep one bit.

No matter how often they are seen, the Rocky Mountain Big Horn sheep in the Clifton-Morenci area draw much attention and a sense of awe to those who see them. That certainly includes motorists who stop and try to capture the sheep on their cell phone cameras.

That happened Monday, Feb. 6, near the Conoco convenience store in Morenci. A herd was grazing along a road across from the store. They did so without a seeming care in the world, although traffic passed to and from or by the store and vehicles continuously drove in and out of the store’s parking lot.

A ram stood closest to the road. He was not grazing but stood still, apparently vigilant over the rest of the herd. 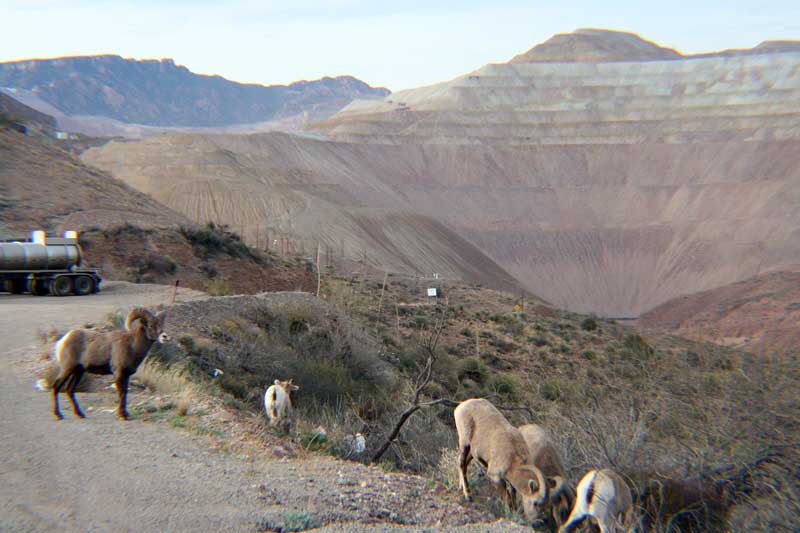 It was not until about 15 minutes after the sheep appeared by the Conoco that motorists finally took notice and stopped to photograph the beautiful critters. After all, it was shift change at the nearby copper mine and people going into or coming out of the store most likely had other things on their minds, such as arriving home or going to work.

The hustle and bustle of humans did not deter the sheep from grazing. It also gave a gilavalleycentral.net photographer the opportunity to photograph the sheep. In the background was the reddish giant lift pile of the Morenci copper mine. The sheep and the lifts made for an interesting contrast.

What came to mind for the reporter was how wild animals, such as the big horns, live in what certainly appears to be a peaceful coexistence with the giant mine. The Freeport McMoran Inc. Morenci mine is the largest open pit copper mine in production in North America.

Visitors who view the mine from an overlook above Morenci have often said they find the mine’s size “staggering.” 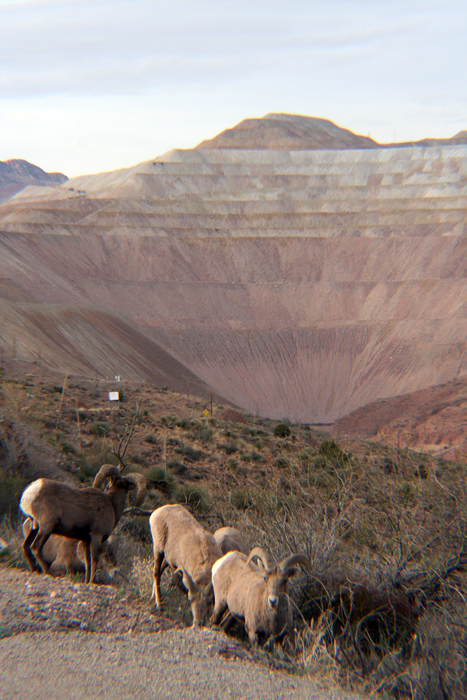 Photo By Walt Mares: The giant lift pile of the Morenci copper mine provides a sharp contrast between wildlife and mining technology. However, the sheep and mine peacefully coexist as the big horns often use the mine as a sanctuary from predators such as mountain lions.

The mine serves as something of a sanctuary for the big horns. There is no vegetation – trees, bushes – to disguise predators or give them any other kind of cover. The lack of vegetation in the mine offers no problem for the sheep. They simply descend to the Morenci and Clifton communities where they find water sources and plenty to graze on. In Morenci, they feed on grass growing along roadsides and they sometimes are seen on lawns in front of homes. In Clifton, they have an abundance of grazing spots, such as the North Clifton RV Park baseball field and the lawn at the Old Clifton Train Depot.

The RV park is one of their favorite grazing spots as the baseball field is about 500 feet long and 500 feet wide. That and the San Francisco River flows immediately adjacent to the park and provides ever more grazing and a definite source of water. The San Francisco is one of only four Arizona rivers that flows year-round.

Predators such as mountain lions are well aware the field is a regular hangout for the sheep. On at least a few occasions, a lion has been seen during daylight strolling through the park, no doubt searching for the sheep. The lions are also active at night. There have been some incidents reported, though few, in which a park tenants have made the mistake of leaving a dog outdoors and  tethered to a leash at night. The dog can become a lion’s meal. The town of Clifton, which owns and operates the RV park, sternly warns tenants to keep their pets inside at night.

An Arizona Game & Fish Dept. website says that the big horn sheep first came from the Mogollon Rim area to Clifton-Morenci in 1964 via the San Francisco. The site says that a ram came down the river and was later followed by more sheep. If that is the case, the sheep made themselves practically invisible.

Morenci native Brian Boling, who is in his 50s, said that beginning in his youth, he and his father, Tony, traversed the local mountains for many years on hunting expeditions. He said he never saw a big horn nor any sign of one in all that time. He said that the only evidence he ever saw of big horns in the area was a “very old skull” that an uncle of his found in the Black Hills of Greenlee and Graham counties. He said his uncle used it as a decoration because it was so unusual.

The existence of big horns in Greenlee has certainly become evident over the past two decades.

Boling said the big horns “have become iconic” and points to items that bear a sheep’s image on items such as T-shirts. The town of Clifton’s official banner prominently displays a big horn on it. A horned ram has become the logo of the Morenci Community Center and of local sports teams. 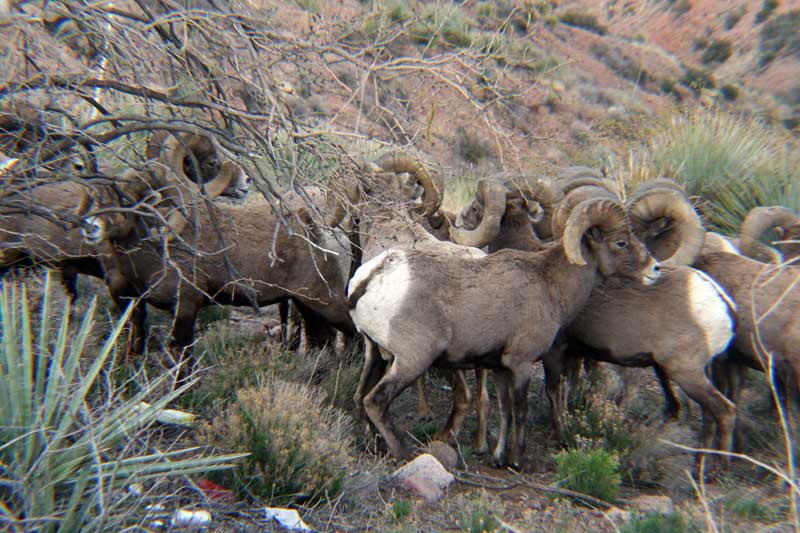 Photo By Walt Mares: Rocky Mountain big horn sheep blend in with the bushes and trees just below the road across from the Conoco convenience store in Morenci. Only a few minutes earlier they were grazing along the roadside.

Their presence has created more awareness of Morenci-Clifton around other parts of Arizona.

Boling, who is the principal at Morenci High School, said quite often members of sports teams visiting Morenci “ask where the big horns are. They say they really would like to see them. They’re fascinated by them.”

As for those visiting athletes who have seen them, most likely right along U.S. Highway 191 or on hillsides between Clifton and Morenci, they express their delight.

Locally, the sheep remain fascinating to residents. That is especially so if the big horns  are seen along a roadside or wherever locals, especially motorists,  can stop and photograph them. Proving the point that the sheep do roam in public areas are the highway signs in and between Clifton and Morenci warning motorists of the presence of big horns in the area and they are in fact seen along the highway.

There are collisions involving the sheep and motor vehicles, which almost always result in the death of a sheep. In a recent 12-year period, 200 sheep were killed by vehicles. Most of those incidents have occurred on 191 and a few occurred involving mine vehicles within the Morenci mine.

Despite that,  the Morenci copper mine remains a sanctuary – a haven of sorts – for the majestic Rocky Mountain Big Horn sheep.