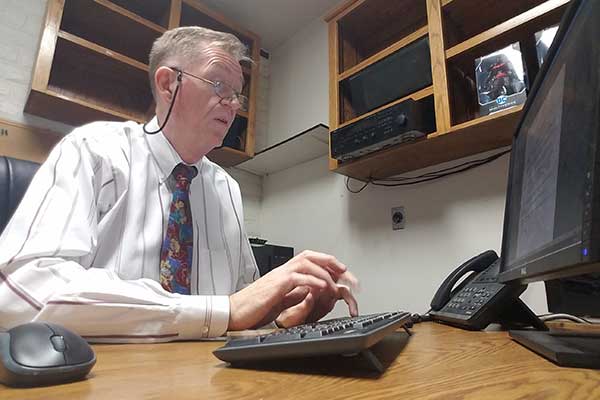 THATCHER – A journalist with nearly 25 years experience is the newest member of the Gila Valley Central and KATO Radio news teams.

“I’m really looking forward to getting back into broadcast, as well as exploring the immediacy of digital journalism,” he said.

Bell started his journalism career in 1996 with the Today’s News-Herald newspaper in Lake Havasu City, serving as a sports writer before becoming the city beat reporter.

In 2000, he jumped into broadcast as news director for the Murphy Broadcasting group of radio stations, covering northwest Arizona, eastern California and southern Nevada.

In 2006 he returned to print journalism, first as a county beat reporter then as sports editor for seven years, before assuming the position of managing editor for Eastern Arizona Courier newspaper in Safford in 2013. Over the past seven years, he added two other newspapers – The Copper Era in Greenlee County and Arizona Range News in Willcox – to his duties as managing editor, directing editorial departments of up to 10 members.

“Being with KATO and Gila Valley Central allows me to do what drew me to journalism in the first place – talking with people and sharing their stories,” Bell said.

Prior to his career in journalism, Bell worked in the mortgage servicing industry and as an improvisational actor in Chicago.

He’s married to SEACUS executive director Royce Hunt-Bell and together they have four sons, one daughter-in-law and a 1-year-old grandson.