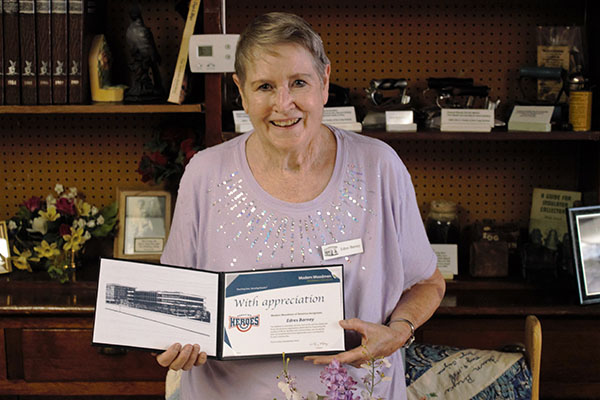 PIMA – Most of the time, those who make the biggest difference in our community are often overlooked. Sometimes, however, there are brief instances when people are recognized for the good they do.

“I think there are many other people more deserving, but I appreciate it,” Barney said. “I appreciate it very much, and I think it’s wonderful.”

Along with the award, Barney was given a check for $50 to benefit the museum. She has been the curator since 1995 and heads up a variety of fundraisers throughout the year, including the Pima Heritage Days.

The award was presented to Barney by the Modern Woodmen of America Youth Service Club of Pima. Club Leader Melinda Reidhead said Barney was a unanimous choice among the club’s leaders and members. Each Modern Woodman club can give the award to one person per year.

“We chose her because she has spent many, many hours volunteering and has put a lot of effort into the museum,” Reidhead said.

Modern Woodmen of America is a fraternal life insurance organization based in Rock Island, Ill. It serves members nationwide, offering life insurance, annuity and investment products along with fraternal member benefits for families and their communities.

The Eastern Arizona Museum and Historical Society is open to visitors from 10 a.m. to 3 p.m., Thursday through Saturday. Recently, new signage was posted thanks to an Eagle Scout project by Drew Jarvis, and the museum’s original wood floor from the 1880s was refinished.